Australians can only hope the New Zealand All Blacks don’t take too much inspiration for this weekend’s World Cup Final from their diminutive countrywoman Lydia Ko, who dominated the LPGA Taiwan Championship to win by an amazing nine strokes and regain the No. 1 ranking in the process.

The New Zealander finished with a 7-under 65 for a 20-under par total of 268 in breezy conditions at Miramar, a day after shooting a 5-under 67 which included a double bogey and another 12-foot bogey save. 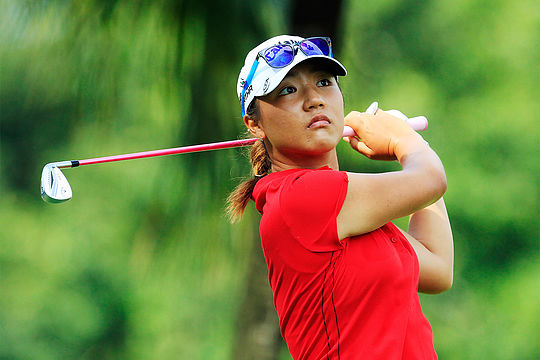 “I think winning and playing well at an event is the top priority,” Ko said. “And then if you get the extra bonus with it, it’s even better. The winning part is probably the most memorable. I haven’t really thought about being world No. 1 again.”

Ko and Korean Inbee Park have traded places at the top over the year but Park was absent this week, opening the door for Ko to return to the top and to ink yet more chapters into the history books.

“I actually met her in Cleveland for an outing a couple months ago,” Ko said about Lopez. “She’s such an amazing person and an amazing golfer. To have beaten her record, it’s an honour.”

Koreans So Yeon Ryu and Eun-hee Ji, both former U.S. Open champions, tied for a distant second at 11-under par with England’s Charley Hull alone in fourth place at 10-under.

“She’s still a teenager, so it’s really hard to believe how she acts and how she plays,” Ryu said of Ko. “I feel really happy to be playing with someone really special on the tour. She’s not only a good player, but she’s a really good person.”

Minjee Lee flew the Australian flag solo in Taiwan and played solidly to finish tied for 10th place at 3-under. The West Australian has now recorded her sixth top-ten in a year where she has enjoyed her maiden LPGA victory and over US$734,000 in earnings, with four events remaining in the season.

Lee is now ranked No. 15 in the Rolex Rankings to be the highest ranked Australian, with Karrie Webb slipping out to No. 26.

The LPGA’s Asian swing continues with the Blue Bay LPGA event in Hainan, China this week, before moving on to Japan for the Japan Classic.