Ko edges Korda for CME, Player Of The Year wins

South Korea’s Jin Young Ko has won the LPGA Tour finale to secure the richest prize in women’s golf and overtake World No.1 Nelly Korda for LPGA Player of the Year.

Ko posted a final round 9-under 63 for a one-shot victory over Japan’s Nasa Hataoka and in the process pocketed a tidy US$1.5 million. It was the second time in three years that Ko has won the LPGA Player of the Year award. 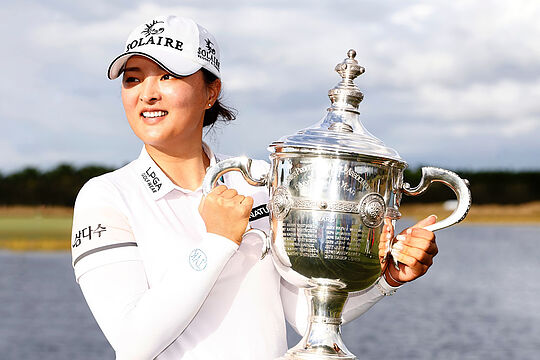 The recently deposed World No.1 began the final round in a four-way tie for the lead with Korda, Hataoka and Celine Boutier and fired four birdies on the opening six holes to gain the advantage with Hataoka never closer than two shots off the lead on the back nine, finishing birdie-birdie for a second straight 64. Hataoka earned $480,000 as the runner-up.

“This week was amazing,” said Ko. “I tried to play aggressive and I got it and I’m so happy. I cannot really believe it. Player of the Year, it’s cool. It’s really tough to get…especially this year with Nelly.”

Su Oh shared 28th position to round out the Australian contingent at the event.