Ko etches her name into history with Evian win

She had already etched her name into a the history books as the youngest winner of a bunch of things, but Lydia Ko has now ticked off the most important achievement of her career with a comprehensive performance to claim the Evian Championship – her first major championship victory.

The 18-year-old world No 2 shot a flawless final round of eight-under par 63 under the pressure of a major but also knowing the round was her final chance to become the youngest ever winner of a women’s major championship. 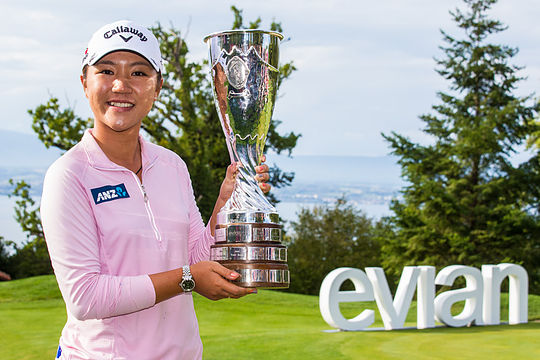 Pulling away from what had been a tight battle with American Lexi Thomson over the closing nine holes, Ko became the youngest woman to ever win a major (18 years 4 months and 20 days) eclipsing Morgan Pressel’s mark when she won the 2007 Kraft Nabisco Championship.

In addition, Ko also became the first New Zealand woman to win a major and just the third Kiwi to achieve the feat behind Sir Bob Charles (1963 British Open) and Michael Campbell (2005 US Open).

“Everyone won’t be asking me when I’ll win my first major because it’s done,” Ko said, admitting the emotion of the moment nearly got the better of her walking up the final hole.

“Yeah, a couple teardrops. I didn’t totally cry-cry. But I kind of got a little overwhelmed, and I could kind of feel tears coming when (caddy) Jason said, enjoy the moment, coming down onto the green.“

“I kind of felt back over the whole week and all the questions I’ve been asked. But in a way I was relieved. But to kind of have that putt go in, I think just everything dropped.”

“I didn’t really know what was going to happen. I mean, it was so amazing, and just, I think, all feelings kind of went into me.”

Ko finished the tournament at 16-under par, six clear of Lexi Thompson in the end with China’s Shanshan Feng in 3rd place at eight-under. The Korean pair of Ilhee Lee and Mi Hyang Lee were a stroke further back in a tie for 5th.

Australia’s best performer was WA’s Minjee Lee who completed the final round in one-over 72 for a four round total of four-under 280, good for a tie for 11th place.

Lee looked well placed to record her best major championship result after eagling the par-five 15th but fell back down the leaderboard with consecutive bogeys on the closing holes.

A past winner of the old Evian Masters event and runner-up here in 2014, Karrie Webb finished at three-over for a share of 38th while Sarah Kemp was at eleven-over in a tie for 69th place.