World No.1 Jin Young Ko has held off a fast-finishing Minjee Lee to secure her 13th LPGA title with a two-stroke victory at the HSBC Women’s World Championship in Singapore on Sunday.

The 26-year-old fired a final round 6-under 66 to notch up an incredible six wins from her last 10 LPGA starts and her first of the year. 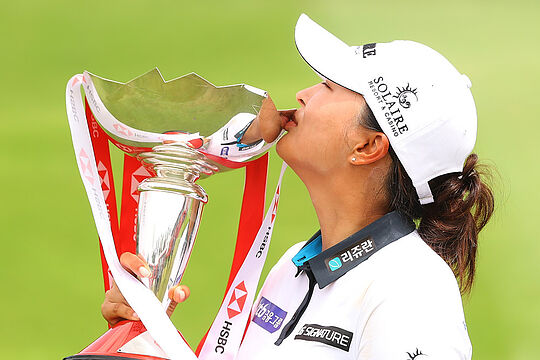 “I didn’t feel comfortable with my swing on the front nine so I expected the back nine would be better than front nine. So I found something and I got a lot of birdies on the back nine.”

Ko began Sunday in a tie for second place alongside Jeongeun Lee6, who looked set to take the title early on after opening with four birdies in her first nine holes before a double-bogey on her final hole saw her slip into a tie for 4th place and three behind Ko.

Meanwhile Australia’s Minjee Lee was tearing up the Sentosa layout with eleven birdies and just two bogeys to record a 9-under 63 and the low-round of the tournament. The major winner fell two short of a playoff in a share of second place alongside overnight leader In Gee Chun and moves to World No.4.

Fellow major winner and West Australian Hannah Green was unlucky not to be in the final mix with an opening round 74 proving very costly in an other solid week of golf. Green is of course fresh off the back of an historic win in the recent mixed-gender TPS Murray River.

Su Oh (T26) and Sarah Kemp (T56) were the only other Australians in the limited field event.

Next up on the LPGA schedule is the Honda LPGA Thailand where Thai star Ariya Jutanugarn will defend her title from last year.