Ko wins first title as a pro at Swinging Skirts

It was only ever going to be a matter of time. Yet even 16-year-old wunderkind Lydia Ko probably didn’t expect it to happen quite this quickly.

The South Korean-born Kiwi turned professional just over a month ago and in just her second event as a professional has scored her first ‘play for pay’ win at the weekend. 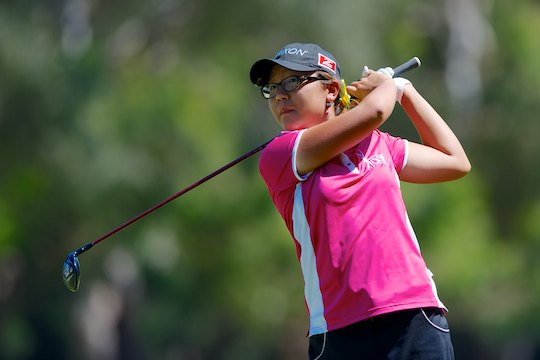 Already rated No 6 in the world, Ko shot a final-round three-under-par 69 to win the US$1 million Swinging Skirts World Ladies Masters in Taiwan by three strokes from two of the world’s best players in 2013, Korea’s So Yeon Ryu and current world No.1 Inbee Park.

Ko made her professional debut and finished 21st in the CME Titleholders in Florida last week before setting the Miramar Golf and Country Club in New Taipei alight with rounds of 68-68-69 to take home the $150,000 first prize and get her career up and running.

Now there’s no telling what this fresh-faced youngster will do in 2014 in the United States.

Ko actually began slowly with a bogey at her first hole in the final-round but she remained as cool as ever with birdies at the fifth and sixth to quickly go under par for the day.

When she added more birdies at the 10th, 11th and 16th, she was able to par the final two holes for a commanding – and popular victory.

Guy Wilson, who has coached Ko since she was six years old, was on hand to watch his awesome pupil in action and was as impressed as the big crowds that followed her every shot.

“I am so proud of how Lydia has proved she is not a player of today but also a player of the future,” he said.

“She is someone that everyone will talk about for a long, long time.

“It proves we can create world champions here in New Zealand when we have the right ingredients.”

Ko plans to launch her 2014 assault at the Bahamas Classic from January 23-26, where she must attend a mandatory rookie’s session, before she heads home to defend her title at the ISPS Handa New Zealand Women’s Open in Christchurch from January 31-February 2.