Ko won by three shots when she rolled in a short par putt at the last hole, with Kooyonga’s 18th green surrounded by thousands of spectators.

But the 21-year-old Green secured the best finish of her short LPGA Tour life, and her best result in her national Open, finishing third.

Ko, 22, left everyone in her wake at Kooyonga with a wire-to-wire victory that trumps her two-shot win at the LPGA KEB–Hana Bank Championship in Korea last year, a triumph that allowed her to take up full LPGA Tour membership for 2018. Now she has won her first start as a member, a feat not achieved in the previous 67 years.

She was No. 20 in the world before this week and will likely be close to the top 10 following her victory and is a potential No. 1 with the quality of her ball-striking, especially with her lasered iron shots. 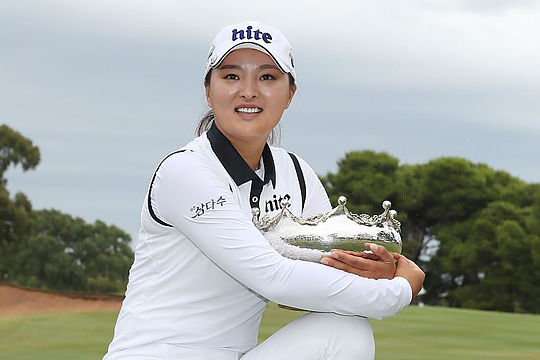 Ko started the week with a 65 and was never headed. Her compatriot Hyejin Choi was the closest, jumping out of the pack to move within two shots at the turn, and still just two shots back when they came down the stretch.

But this was how it went. Ko hit a beautiful seven iron shot to the 17th green, where the pond on the right represented potentially her only way of losing the Open. Then she rolled the putt down the hill and into the cup from five metres. Game over.

The look on her face changed. “Relief,” she said it was.

Down the 18th fairway with the whole throbbing Kooyonga crowd to watch her, she made jokes with Australian caddie Dean Herden, who has been with her for two years. “Scary Dean,” she calls him, and she added today that Herden’s face had been grim throughout. “He’s nervous,” she said. “Me too.”

On Sunday she shot a three-under par 69, starting out with two birdies that stretched her initial lead of four shots to six. She made some mistakes along the way, but none too calamitous, and she hit 15 of the 18 greens in regulation.

In four rounds she only missed 11 greens, the best result in the field, and posted 14-under, remarkable scoring on a course as tricky as Kooyonga.

Choi finished second at 11-under, closing with a 67. She is a phenomenon at 19, formerly the world’s best amateur and now one of the best players in the world. Period.

LPGA Tour rookie Green was outright third and had nothing to be ashamed of her first appearance in the final group at an Open. She is 21, starting out her first season on the LPGA, and has already earned more than $US 100,000 with the $87,000 she earned today, enough to be within sight of a guarantee of a longer tenure as a tour player.

“I’ve started off really well,” said Green. “My goal was to get into every major, and I know that’s quite hard, being a rookie this year, so hopefully I’ve made enough money and keep making money to make sure that I’m definitely in.”

More importantly, she showed she could compete. Right to the 17th, when she hit a gorgeous iron shot in close and made the birdie, she was doing her best to push Ko. She shot 69 on the day, but she was always chasing once she went par-par on the opening two par-fives to Ko’s birdie-birdie.

“I’m very proud of my week this week,” she said. “It’s great to be playing Aussie Open and be contending.”

Katherine Kirk and Minjee Lee also had their moments on the final day, Kirk starting out with no expectations and an eight-shot deficit, playing loose and shooting the day’s low round, a 65. The Queenslander fist-pumped when she rolled in her birdie putt at the 18th, held the clubhouse lead for an hour or more, but ultimately finished fourth.

Lee knew that she needed to go very low and set herself up with two birdies in the first five holes, but by the time she bogeyed the 16th her chances had evaporated. She carded a 70 to finish fifth.