World number one Lydia Ko put on a master class in course management and patience to clinch the ISPS Handa Women’s Australian Open championship at Royal Melbourne on Sunday.

It was Ko’s first win since claiming the world number one ranking and at 17, she became the youngest ever winner of the Australian Open title. 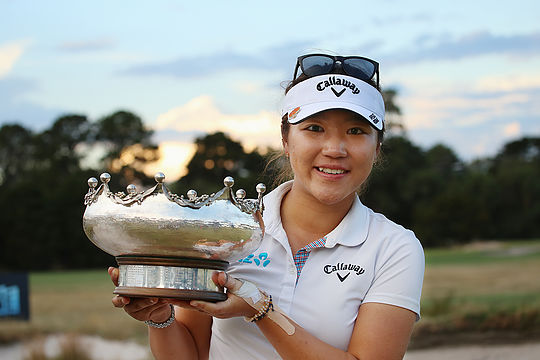 Ko executed her plans to perfection in firm and fast conditions to outclass the field with consistent rounds of 70-70-72-71 for a 9-under-par total, capturing her sixth LPGA title by two strokes from 25-year old Korean Amy Yang.

“It’s great. I struggled in the last round at the last couple Australian Opens but this year, I played pretty solid.” said Ko. “I think that’s a really important thing and just to win on such an amazing golf course here at (Royal Melbourne), I think that’s another bonus.”

The 17-year-old started the day in a tie for the lead with the exciting Ariya Jutanugarn from Thailand, however it was Yang who made the early running with a hot putter early in the final round.

A pitch-in eagle by Ko at the short third looked to be the catalyst for her to grab the championship by the scruff of the neck but the Composite Course and breezy final round conditions conspired to prevent anyone from running away with the title.

A 90-minute lightning delay hardly seemed to phase either of the leaders, however Ko made a crucial birdie putt at the 12th to seize some momentum.

“I made a good putt on that hole yesterday and I made another good putt there. I thought it was short but I put all my prayers into that putt and told it to go and it dropped and that was awesome.”

Yang’s challenge faltered when she missed a short par putt at the 15th to fall out of a share of the lead, followed by another at the 17th after pulling her pitch shot left of the green. The 2006 Australian Ladies Masters winner when a school student on the Gold Coast, eventually finished in second place at seven-under par.

The flamboyant Jutanugarn lost a playoff in the Bahamas two weeks ago and continued her hot start to her rookie LPGA season by finishing third at four-under-par, two ahead of American Jenny Shin and Koreans Ilhee Lee and Chella Choi.

Australian Minjee Lee, who is also making a great start to her rookie campaign, was among five players at one-under-par in a tie for seventh while defending champion Karrie Webb came home strongly at the weekend in her first event of the year with consecutive rounds of two-under 71.

Webb and Katherine Kirk finished the championship tied for 16th at one-over-par.

Ko will enjoy a hero’s reception when she returns to the ISPS Handa New Zealand Women’s Open in Christchurch next week, which forms part of the ALPG and Ladies European Tour, while Jutanugarn will chase her maiden LPGA title in her homeland at the Honda LPGA Thailand in Chonburi.