New Zealand’s Lydia Ko climbed back into the winner’s circle in Canada on Sunday, a country that has welcomed her with open arms since she took out the first of three Canadian Open titles as a 14-year-old amateur in 2012.

To secure her third Canadian tie and the chance to cash a cheque for doing so for the first time, the world number two had to overcome world number three Stacy Lewis in a playoff after the pair were tied at 12-under par in regulation. 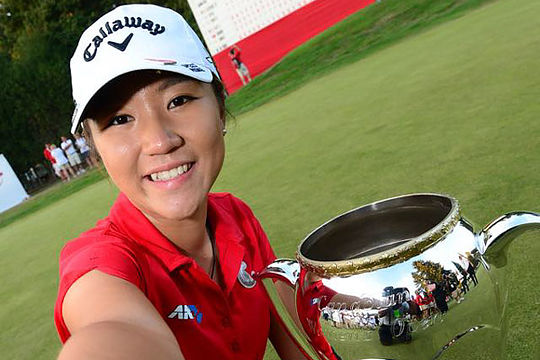 Lewis had fired an impressive five-under 67 to tie Ko at the top of a crowded leaderboard but her good fortune was soon to run out.

After finding a heavy lie in the left rough on the 18th hole in the playoff, while Ko split the fairway, Lewis yanked the ball well left and short of the green while Ko found the target with her approach, albeit a good 50 feet from the hole.

After pitching off hardpan to 10 feet, Lewis watched on as Ko lagged her putt close before missing her own par attempt, leaving the stage for the 18-year old to claim her 8th LPGA Tour win.

“It feels amazing,” Ko said, who earned $337,500 for the win, “It’s great to come back to Vancouver and play well in front of such big crowds. I had an amazing week.”

“It would have been great if I was coming down the 18th with like a four-shot lead like I did in 2012,” Ko said, “But it is what it is. Stacy played amazing today; to shoot 67 under those conditions.”

While Ko extended her playoff record to an impressive 3-0, Lewis slumped to a career 0-3 record, although a playoff was far from her thoughts at the start of the round.

“Well, if you would have told me at the beginning of the day, I was going to be in a playoff, I would have been pretty happy,” Lewis admitted. “Just with the way my game has been over the last month or so, I felt I was close to putting together a good round, and that’s what I did today.”

“But, would have liked a better lie in the rough in the playoff, but other than that, it was pretty good.”

The Korean pair of So Yeon Ryu and Sei Young Kim tied for 3rd at 11-under, while Australians Minjee Lee (T23rd) and Sarah Kemp (T32nd) were solid if not spectacular as the low Australians to complete the championship.

Lewis will head to Prattville, Alabama for this week’s Yokohama Tire LPGA Classic at a layout that she has enjoyed success at in the past, having won the event in 2012 and finishing runner-up last year.