Ko wins third title of the year in Arkansas

World number one Lydia Ko captured her third title of 2016 and the 13th of her still young LPGA Tour career, with victory at the Walmart NW Arkansas Championship on Sunday.

A brilliant eagle on the final hole for a nine-under round of 62 on Saturday set up the win, which Ko delivered after a final round three-under par 68 to finish the tournament at 17-under par. 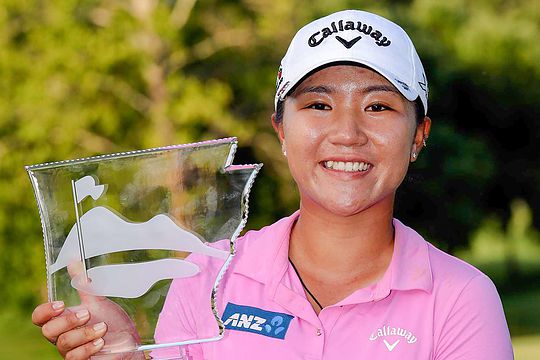 The mark set a new tournament record for the Championship and a three stroke margin over victory to American Morgan Pressel and Taipei’s Candie Kung at 14-under.

“Yesterday, I had a hot back nine and today I had a hot front nine,” Ko said. “But, you know, I think as soon as I ‑‑ after a few holes, to the back nine, I think the sun kind of got to me a little bit. I could definitely feel the heat.”

“I hit the ball really well on the front nine but I didn’t hit it that well on the back, and that kind of happened for my second shot on the last hole.”

“Not the fanciest way to finish off a championship, but I’m just going to think of it as me bogeying another hole.”

Perth’s Minjee Lee finished inside the top-ten after a final round 67 tied her for 8th place at 10-under par, while Victorians Sarah Jane Smith and Su Oh finished in a share of 32nd place at 7-under.

Oh’s solid result was a further nail in the coffin of Karrie Webb’s Olympic dream with only a few tournaments now remaining for the Hall of Famer to overtake Oh (No. 42) on the Rolex Rankings to make the Australian team alongside Lee in Rio.

Webb (No. 60) did not play in Arkansas and has just the Portland Classic and U.S. Women’s Open over the next two weeks to force the issue before the Games teams are decided.