Nine months after Koepka shot a final round 63 to capture the 2018 PGA Championship, the three-time Major winner duplicated the score with seven birdies on the opening day of the year’s second major.

The current World No. 3 then described the round as one of the best of his career.

“That was one of the best rounds I’ve played probably as a professional,” he said.

“This golf course is brutal. If you’re not going to drive it, like I said, it tests every asset of your game. You’ve got to drive the ball straight.”

“It’s long, so you’ve got to hit it far and really position yourself with some of these shots in. You can’t miss — you can’t take a shot off, and that’s what I love.”

When Koepka hit the clubhouse England’s Tommy Fleetwood was in distant second place after posting a 3-under 67.

However, by the end of the day it was New Zealand’s Danny Lee who was able to snatch outright second place following a 6-under 64, which included two bogeys at the 5th and 15th holes.

The news was not quite so good for Tiger Woods, who was returning to competition for the first time since capturing his fifth Masters title.

The former world number one stumbled his way to a 2-over 72 on the opening day of the PGA Championship. 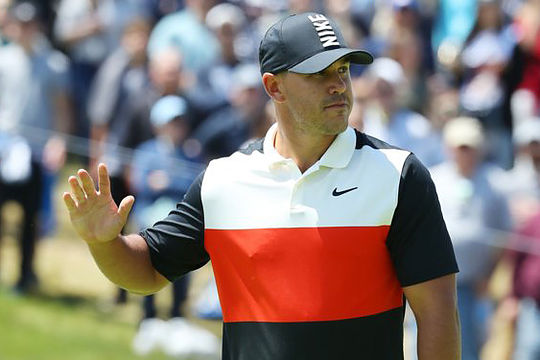 The Black course at Bethpage Park greeted Woods with a double-bogey ‘6’ and while the 43-year-old eagled his 13th to get back to one-under, he then dropped three shots over his closing five holes.

Nine years ago, Woods had produced an opening 67 on the same par-70 layout and was never headed in capturing the 2002 US Open by three shots at three-under, and the only player to finish the four rounds under par.

“I did fight my way back and got it under par for the day but just let it slip with a couple of mistakes and a couple of bad putts at the end.”

Jason Day leads the way for the Aussies at 1-under and equal 9th in a round that included three bogeys matched by four birdies.

Adam Scott sits in a share of 41st at 1-over. The Queenslander was well on track at 2-under after seven holes before coming unstuck at the par-3 8th hole with an inexplicable double-bogey from the greenside bunker followed by a bogey at the 10th.

For the rest of the Australians in the field, Friday’s second round will be a battle just to make it through to the weekend.

Cameron Smith sits at T74 followed by Lucas Herbert and Marc Leishman in a share of 91st place at 4-over.

Japan Tour star Brendan Jones sits at 8-over following a round of 78 with Stuart Deane and Craig Hocknull another four shots back in a share 153rd.