Koepka has battled multiple knee, wrist and hip injuries across the past few seasons and no doubt the reduced schedule and increased purses was a major factor in his decision to move to LIV Golf this year.

“It was before LIV, when I blew my knee out and my foot was pointed that way, almost backwards and sideways…I’m going to have to have knee replacement in a few years. I wasn’t sure whether I could even move the same way and if I want to play if I could move the way I wanted. I’m fortunate be in the spot that I’m in right now.”

“Honestly, to me the big thing today was getting the team win,” said an emotional Koepka, who carded a final-round 69 to finish on 12 under alongside Uihlein in the last of the individual 54-hole matches of the LIV Golf season for 2022. 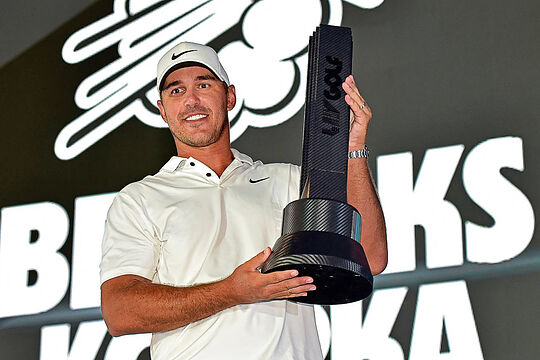 “I told my brother I’d buy him a Lambo if we won the team thing, so I’ve got to go buy one.”

Uihlein’s failed bunker shot onto the green on the third playoff turned out to be a very expensive mistake for the American. Victory would have given the two-time LIV Golf runner-up second place on the season-long points race and the $8 million prize money.

In the end, Uihlein had to settle for third place and $4 million along with the $2.125 million for finishing second and his $750,000 share of the $3 million team victory prizemoney. Not a bad week and the 33-year-old is well aware of that fact.

“Consolation…still a good chunk of change and the team, yeah, we’re peaking for Miami, which is what we want to do,” said Uihlein referring to the $50 million on offer at the teams final in Florida from October 28.

Jed Morgan lead the way for the Australians in a share of 12th place. Cameron Smith struggled again this week carding rounds of 69-68-69 to finish midway down the leaderboard on equal 21st and 5-under.