Brooks Koepka has secured his third trophy in his last six majors holding off a determined Tiger Woods and Adam Scott to win the PGA Championship at the Bellerive Country Club in St. Louis.

Koepka fired a final round 66 to finish at 16-under for his second major win of the season and two shots clear of Tiger Woods. 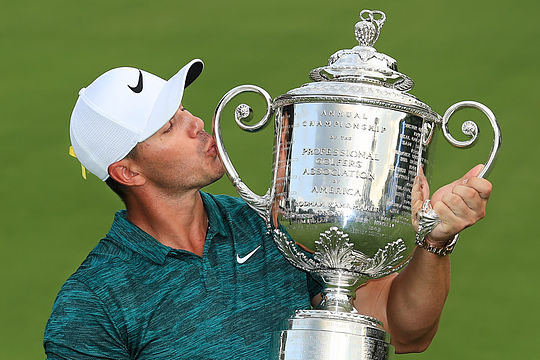 Koepka becomes just the fifth player in history to win the US Open and PGA Championship in the same year joining Woods, Jack Nicklaus, Ben Hogan and Gene Sarazen.

The Florida native displayed both the nerve and the skill to compete at the highest level down the final stretch with birdies on the 15th and 16th to pull away from Scott, who was tied for the lead along Koepka at the 13th and 14th holes.

“For some reason, the majors just get my attention, it’s so important,” said an elated Koepka. “When you’re out here grinding away, firing at some flags, firing at the middle of the green, you just got to be very patient, and I always do a pretty good job of that in the majors.”

“The beginning of the back nine I could hear all the roars, when Tiger started making his little run, and then Scotty made his run it got quite loud. It was enjoyable, enjoyable to play in front of fans that love golf and are cheering for us.”

Woods was equally impressive nailing critical putts and drives from the tee to highlight his impressive power and never-say-die attitude making birdie on the 18th to record a final round 64.

It was his best display in a major for nine years and is on the back of a 6th place finish at The Open. Woods was clearly enjoying being back in the mix with a classic Tiger fist pump on the 18th after nailing a birdie that sent the fans into overdrive.

“At the beginning of the year, if you would have told me I’d have a legit chance to win the last two major championships, I would have replied ‘with what swing?,” commented Woods.

“I didn’t have a swing at the time. I had no speed. My putting was okay, but God, I hadn’t played in two years. So it’s been a hell of a process for sure.”

Scott certainly had his chances to claim a second major. But Koepka was just too solid nailing critical birdies to keep Scott at bay, yet the Aussie fought gallantly.

“Just didn’t have it the last couple of holes,” said Scott. “I just didn’t drive it up to what I would expect in this kind of situation to win.”

Coming into this week, the former world number one had fallen well outside the world’s top-50 to 76th and was ranked a distant 119th in the FedEx Cup points list.

Scott needed a special exemption from the PGA of America just to play this week and hadn’t recorded a top-five finish, on any tour, in two years.

American Stewart Cink and Spain’s Jon Rahm finished in a tie for fourth on 11-under-par with Thomas Pieters and Open champion Francesco Molinari in a tie for sixth on 10-under-par.

Jason Day failed to fire in the final round falling thirteen places into a tie for 19th following a lacklustre 1-over 71.

Cameron Smith matched his second round with another 4-under 66 to move into equal 56th while Marc Leishman closed with a 71 and equal 71st.

Craig Hocknull was the only Australian to miss the weekend cut.