(Erin Hills, Wisconsin:) New US Open champion Brooks Koepka handed the European Tour a huge compliment singling out the experience of victories in Spain, Italy, Scotland and Turkey as instrumental in leading to success at Erin Hills.

Last year, Koepka was a member of the victorious USA Ryder Cup team having heralded his Stateside presence a year earlier in 2015 by winning the Phoenix Open on the PGA Tour. 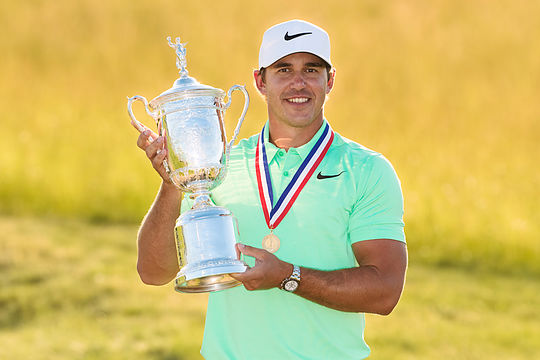 But unbeknown to his countryman, Koepka had already been making a name for himself years earlier firstly in September 2012 on the European Tour’s secondary Challenge Tour by winning in Spain, at age 22, and just three months after turning pro.

With his Challenge Tour card assured, Koepka returned to Europe in 2013 winning the Montecchia Golf Open in Italy and followed that success a month later in sealing victory at the Fred Olsen Challenge de Espania, and in the process setting a new tournament record of 260 (−24 under), and winning by a record 10 strokes.

But if there was one standout victory it materialised three weeks later in the Scottish Hydro Challenge, with the homesick American defying the extremely trying weather conditions and long rain delays at Spey Valley, to win by three strokes and thus gain automatic membership on the main European Tour the next year by winning three events in a single season.

A day after winning in Scotland, Koepka qualified for the 2013 Open Championship at Muirfield.

With his European Tour card assured for 2014, Koepka was also being granted invitations on the PGA Tour. In his very first event, the Frys.com Open, he led after the second and third round before finishing T3rd.

He contested the US Open that same year finishing fourth to earn full PGA Tour membership but remaining faithful to the European Tour.

Koepka had been third in the 2014 Dubai Desert Classic in January and then later in the year, third in the European Masters and ninth in the Alfred Dunhill Links Championship at St. Andrews.

A few weeks later, Koepka captured the rich Turkish Airlines Open that helped him to finish eighth on the Race to Dubai and to be voted “European Tour Rookie of the Year”.

Koepka now elected to give up his European Tour membership for 2015 to turn his full attention to the PGA Tour, and he did not have to wait long in winning the Phoenix Open in just his third Tour event that year.

He ventured back to Britain in July to finish T10th in The Open, and also at St. Andrews, and in the very next Major he was fifth in the PGA Championship.

Now as the newest Major winner, Koepka spoke of his fondness for the European Tour and how it helped cement the foundations for the 2017 US Open winner.

“Going over to play the Challenge Tour was really, really cool, to get to travel the world at 22, 21 years old, and do what you do for a living is pretty neat,” he said.

“I love travelling. I’ll go anywhere. I think it’s so much fun. And some of the places we went to were pretty neat. And to go over there and compete in Europe helped me grow up a little bit and really figure out that, hey, play golf, get it done, and then you can really take this somewhere.”

“And, along with winning three Challenge Tour events and also winning the Turkish Airlines Open meant I built a lot of confidence off of that.”

But then Koepka, with the gleaming US Open trophy placed beside him in the Media Centre at Erin Hills, also revealed the anguish he endured on the eve of winning the Scottish Hydro Challenge and wondering if being in Europe was all worth the pain of continually missing his family and friends back in the US.

“There was a low point and it was the night before the final round at Aviemore,” he said.

“I called Blake Smith, my manager, right before I won the final Challenge Tour event to get to my full European Tour card. It was the night of the third round. I called him and I was like, I don’t even want to play. I just want to go home. I was kind of — I don’t want to say homesick, it was just tired of golf.

“I was tired of all the travelling and I just wanted to be home, even though I think I had the lead at that point and was about to win the third one.”

“For some reason I just wanted to get out and go home. I don’t know why.”

“It was one of the — I’ve never felt that way. I don’t want to say — I don’t even know what was going on. It was one of those things, I think I had played so many weeks in a row, not a day off, it really got to me. That’s all I can say, I guess.”

The new US Open winner has no need to make any apologies and remarkably having now won on three continents.

And all thanks to his European Tour roots.