It is a year ago, when the-then No. 1 ranked golfer in the world was forced to withdraw from the CJ Cup after slipping on a wet concrete pathway late on Friday and aggravating his injured left knee. 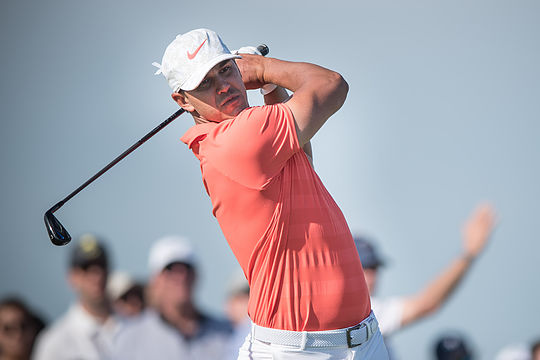 Koepka was the defending champion at the South Korean event and 13 strokes behind leader Justin Thomas at the time of his departure.

The American had recently completed stem cell treatment on his knee in late August, and the CJ Cup was just his second event back.

Koepka was side-lined for nearly three months meaning he had to withdraw from last December’s Presidents Cup and ended 2019 down to No. 7 in the world.

He eventually returned to competition in mid-January contesting the European Tour’s Abu Dhabi HSBC Championship (T34th) and the Saudi International (T17th) and then re-joining the PGA Tour mid-February when he teed-up in four events, including the cancelled Players Championship ahead of the lockdown.

He returned for the June 11th restart and contested eight events, capped by a share of second in the WGC – FedEx St. Jude Invitational, before again being forced onto the side-line with injury and having to pull-out of the U.S. Open, which he won in 2017 and 2018.

Two months on and the No. 11 ranked Koepka is sounding confident in his first event of the 2020/21 Tour schedule.

“It’s nice to be back and I’ve spent the last two months pretty much rehabbing, getting everything squared away,” he said.

“My knee’s a million times better. I really had no idea how bad I felt through the whole year. Obviously Memorial was kind of its peak of when it was its worst, and then at the PGA it didn’t feel great.”

“It just kept getting progressively worse. I’m happy — I did another round of PRP about three weeks ago on my knee and then I had a shot in my hip at Boston. It’s just all about trying to make sure everything’s good.”

“I spent basically the last month out in San Diego, so I haven’t been home. I’m just doing rehab every day and just trying to get better.”

“So, I feel good. Started hitting balls maybe 10 days ago. Actually, it was pretty good. Got out here on Thursday, went out to Butch’s place, just hit a few balls to get the week started.”

“Hopefully, I’ll be fine. I’ve got my body squared away, feels a lot better. I didn’t know how bad I felt until I actually it felt good. It’s nice to be back.”