Brooks Koepka secured his first major championship with a four stroke US Open victory at Erin Hills in Wisconsin on Sunday. The 27-year-old fired a flawless 67 in the final round, nailing critical putts when he needed them and in the process he becomes the seventh first time major winner in a row.

Koepka went into this US Open, his fifth, with one PGA Tour victory and one European Tour title but had finished in the top-5 at a major three times before. His 16-under total tied Rory McIlroy for the US Open record for total score under par.

“I felt like I put myself in contention so many times,” said Koepka. “And I don’t want to say I got unlucky. I felt like I just never fully came together.”

“I put myself in some good positions in the majors over the last few years and never really quite came through. But I just felt like I should be winning more. I’m not a big fan of losing. And I just couldn’t stand the fact I’d only won once.” 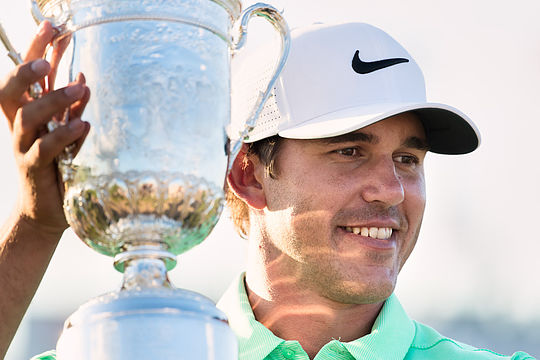 Kopek began the day a shot behind the leader, Brian Harman. Coming up the par 5 18th fairway, he had built a four-shot lead and looked every part the US Open Champion after closing with a 3-wood tee shot on the 18th that flew 346 metres, leaving him 250 metres for his second.

Yet Koepka didn’t win on a 7,132 metre course because he was long and powerful. He won because he was more accurate than anyone in the field hitting 49 of 56 fairways. Add into the mix his putting stats during the closing back nine on Sunday and he was a formidable force.

What’s In The Bag: Brooks Koepka

“I played really solid from the moment we got here on Monday and all the way through until today,” said Koepka. “This golf course, you had to put the ball in the fairway and if you didn’t you really got penalised, just plain and simple.”

American Brian Harman held a one-stroke lead entering play Sunday yet he was unable to keep the momentum going and eventually finished in a tie for second alongside Japan’s Hideki Matsuyama, who began the final round facing a six-stroke deficit only to fire an impressive 6-under 66 final round.

The Australian contingent simply did not ignite at this Major.

Adam Scott and Jason Day missed the 1-over cut mark, Scott shooting 3-over and Day 10-over and were among several high profile players to sit out the weekend.

The top-2 ranked players in the world, defending champion Dustin Johnson and 2011 US Open winner Rory McIlroy, also failed to make the cut.

Marc Leishman was the best of the Aussies and at one stage was just three off the leaders, however closing rounds of 72-75 had him finishing in a tie for 27th position.