The rivalry has been simmering for years and Friday’s fifth iteration of The Match in Las Vegas was billed as the settling of a feud between Brooks Koepka and Bryson DeChambeau. But it was Koepka, who well and truly came out on top.

So much so that the 31-year-old won the match, 4&3, with DeChambeau unable to secure a single hole all day at the $600 per round Wynn Golf Club.

“Where was this on the PGA Tour man, I mean you are playing so good right now,” said DeChambeau, who was clearly taken aback by Koepka’s sudden form reversal.

Koepka had indeed been struggling on the PGA Tour this season after missing his last two cuts and barely scrapping into the top-40 prior to that. However, DeChambeau hadn’t played on the PGA Tour at all this season, preferring to try his hand at the World Long Drive Championships where, to his credit, he performed above expectations. 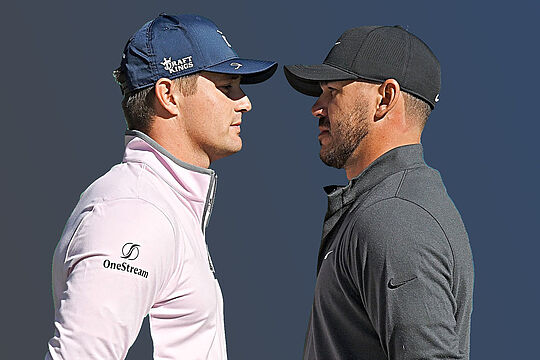 But we all know that Koepka likes the big occasions. He’s won four majors against just four regular PGA Tour events since his official debut in the US in 2015. Of course his clear distain of DeChambeau probably helped too.

From the outset, Koepka was hell-bent on taking down DeChambeau and when the 31-year-old is in that mindset there is little that can be done. DeChambeau could only sit back and watch as Koepka zeroed in on every green, giving nothing back to the 2020 US Open winner and leaving him winless on each of the 9 holes they played before DeChambeau’s concession.

“I’m not going to lie. I just wanted to spank him,” said Koepka.

DeChambeau is now 1-1 in The Match series after taking down Tom Brady and Phil Mickelson alongside partner, NFL star Aaron Rodgers in July.

As for a rematch? DeChambeau is ready and waiting.

“I’ve always had respect for Brooks. He’s won four major championships and what he’s done for the game…and at the end of the day it was 12 holes and he got me. So, hopefully, there will be a rematch sometime soon.”

Will Koepka leave him hanging? Probably.