Nanna Koerstz Madsen has taken out the 2022 Honda LPGA Thailand to become the first LPGA Tour winner from Denmark. 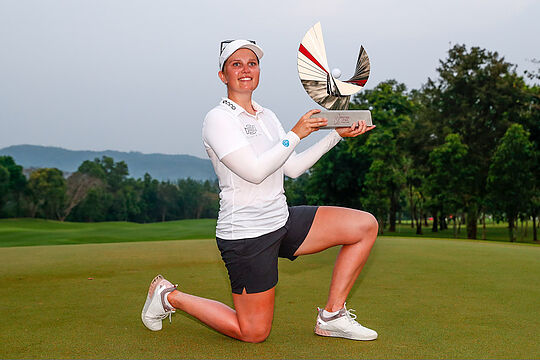 Both players set a new tournament record of 26-under-par in regulation, and then birdied the par-5 18th in the first extra hole before the Dane sealed the win with a two metre eagle putt at the next hole to secure her biggest career victory.

“It’s amazing. It’s a dream come true,” said Koerstz Madsen, an LPGA Tour Member since 2018. “It was a crazy day; a lot of good things. It was actually fun playing the playoff with (Xiyu) at the end. I’m really excited to be standing with the trophy right now.”

The maiden victory was timely for Koerstz Madsen who in 2021 secured two top-5 finishes in majors to add to her three top-10 finishes from 2018-20. During 2021, Koerstz Madsen tied for third in the ANA Inspiration and had a share of fifth at the Women’s British Open. Her best result on the LPGA was second at the 2019 Indy Women in Tech Championship.

Celine Boutier of France finished a shot behind the leaders in third after a final-round 67. Three-time champion Amy Yang (64) of South Korea and Canadian Brooke Henderson (67) finished another two shots back.

Oh had earlier lead the field after opening with bogey-free rounds of 63 and 65, however, a 73 on Saturday followed by a 70 on Sunday saw her fall well out of contention.