It was a day of drama in the Men’s Australian Amateur at The Grange Golf Club in Adelaide as aspirations were dashed and dreams revitalised with the two semi-final matches determined on the 18th.

The fallout has sent the locals running as Anthony Murdaca, a member of The Grange, let his chances of making the final slip with one loose shot on the 18th after pushing Korean-born New Zealander, Tae Koh, to the wire. 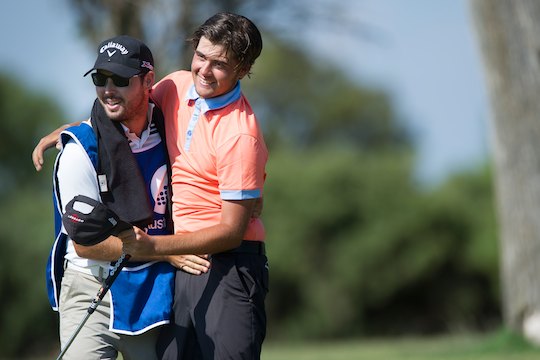 Curtis Luck is all smiles after winning his match over Todd Sinnott in the semi-final of the Australian Amateur in Adelaide (Photo: Anthony Powter)

Koh will meet Western Australian Curtis Luck in the final after Luck defeated Todd Sinnott on the 18th with an exquisite up-and-up from the bunker for a par after Sinnott was forced to chip out left-handed behind a tree when his 3-wood from the tee went wayward.

Both the men’s semi-finals could have fallen either way.

The difference, one forced error by Sinnott and Murdaca in a war of attrition after a week of heat and brain-sapping focus, which is associated with match-play encounters at this level.

It was heartbreaking to watch Murdaca falter down the 18th after surviving so well during the week.

With the largest group of supporters of any player urging their boy along, Murdaca looked every part during the earlier stages of his encounter with Koh that he would be making the final.

Murdaca was outdriving, out putting and out smarting Koh, yet it was Koh’s short game and putting that kept him alive.

Eventually, it would take its toll on Murdaca.

Earlier in the morning’s quarter-final, Murdaca had disposed of the much touted Cameron Davis, 4&3. But the signs of trouble were there as Murdaca continued to fight the hooks through their match, with Davis also not capitalising on the opportunities as they arose.

Ultimately the hooks would return at the worst possible time for Murdaca – on the East Course’s 18th, a 523 metre par 5 – with his second approach shot with a mid-iron landing in all sorts of trouble 100 metres from the green in deep tree line rough following a superb drive from the tee.

Koh had edged a softly hit three wood to the left of the fairway leaving a straight forward chip to the green.

Murdaca was unable to recover as his ball again found wood.

One shot had cost Murdaca his chance of making the final against an opponent that he should have disposed of earlier and be heading for the locker room as opposed to fighting it out down the last.

The Sinnott and Luck encounter produced superb golf, with Luck keeping his nose in front by the narrowest of margins until Sinnott got the match to all-square heading down the 18th.

Earlier Sinnott nailed an ace on the 220 metre par 3 12th, his first hole-in-one in competitive golf.

The joy would be short lived and you feel Sinnott would have swapped the ace for a better drive off the 18th.

Sinnott played stellar golf and was obviously gut wrenched with the outcome.

He will return, Sinnott is too much of a talent and we will hear more of him in the professional ranks – the logical next step for him.

Luck heads into tomorrow’s 36 hole final having recently won the Victorian Junior Amateur and with momentum on his side.

Add to the mix his victories this week over Simon Viitakangas, the winner at last week’s Australian Master of the Amateurs and today’s win over Sinnott – the Western Australian has collected a number of prized scalps on his way to the final.

Koh is ranked 275th in the world and has only won local New Zealand events – nothing of any international note.