Canadian Jason Kokrak fired an even-par 70 on Sunday to hold off Jordan Spieth to win the Charles Schwab Challenge at 14-under-par.

The two stroke winning margin gave Kokrak his second PGA Tour victory for this season after winning the relocated CJ Cup last October. He joins Bryson DeChambeau and Stewart Cink as the only multiple winners this season.

Spieth, the 2016 winner at Colonial, was a runner-up for the third time after leading each of the first three rounds. The 27-year-old shot 3-over 73 to fall short in his bid for a 13th PGA Tour victory.

Kokrak is the second player in the last three years to win his first two tour titles after the age of 35, joining Francesco Molinari. The 36-year-old began the final round trailing Spieth by one, and both players in the final pairing got off to a slow start.

Kokrak bogeyed the par-5 first and added another to his scorecard on the 4th. However, Spieth bogeyed three of his first four holes to quickly give up the outright lead, which he was never able to regain.

Kokrak stumbled with bogeys at the par-4 15th and par-3 16th but closed with back-to-back pars to deny Spieth the win, who had ended a four-year winless drought last month at the Texas Open. 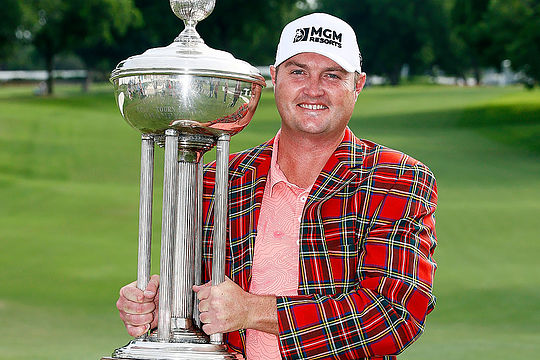 “We had a little bit of an ebb and flow. Both didn’t have our A-games today,” said Kokrak.

“Kind of grinded it out. DRob kept me patient, even though I didn’t finish the way I wanted to, but still got the win.”

Kokrak has already earned over US$3.2 million this season, and is now ranked 22nd in the world. Last October Kokrak won the CJ Cup at Shadow Creek for his first PGA Tour victory after nine years and 233 starts on tour after joining in 2012.

Cameron Davis finished the best of the Australians after a final round 68 moved Davis up sixteen places to finish in a share of 45th position. Davis was the only Aussie to make the weekend with Matt Jones and Cameron Percy missing the plus 1-over mark.

The PGA Tour heads to Columbus, Ohio, this week for the Memorial Tournament hosted by Jack Nicklaus.