Jason Kokrak and Kevin Na have won Greg Norman’s QBE Shootout with a stunning display of golf on the final day of the 54-hole tournament in Florida.

Team Kokrak/Na fired 12 birdies across their last 13 holes for a 33-under total to deny a group of teams including Australians Jason Day and Marc Leishman, who look set to take out the tournament after leading all week following an opening 16-under 56. 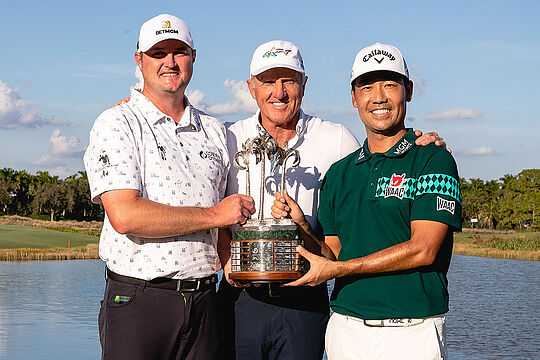 Unfortunately a final round 65 left the Aussie duo in a share of third place alongside Matt Kuchar and Harris English and a shot behind Billy Horschel and Sam Burns, who took outright second place on 32-under.

The only other Aussie in the field this week, Matt Jones, teamed up with Ryan Palmer to share 11th place.

“Kevin and Jason [Kokrak], they played some unbelievable golf,” said Leishman. “I don’t even know what we shot. We just left too many shots out there and just couldn’t get it going. In four-ball you have to see those putts drop in and we weren’t able to do that.”

“We’re disappointed that we didn’t win, but at the end of the day we still had a good time and did as good as we could and wasn’t quite good enough.”

The victory was icing on the cake for both Jason Kokrak and Kevin Na, who enjoyed stellar seasons on the PGA Tour finishing in 3rd and 11th places respectively in the FedExCup.

“We both had nice years. Third in the FedExCup was unbelievable. He was one of the hottest players in the world at the moment. We play a lot of practice rounds and he brought that hot putter this week,” said Kokrak.

“I told him a couple weeks ago, I said, Just bring that putter and we’ll be all right. So he definitely brought it this week. We had a lot of fun, too.”

The only LPGA player in the field this week, Lexi Thompson, teamed up with two-time Masters champ, Bubba Watson. The pair got off to a hot start with an opening round 59 but faded to finish in a share of 9th in the 12-team event.

The QBE Shootout marks the last of the events on the PGA Tour schedule for 2021. The Tour will restart in Hawaii on January 6th at the $8 million winners-only Sentry Tournament of Champions.