Kokrak finished at 10-under-par closing with a final round 65, including four straight birdies, to secure the result which sees him with three wins in his last 27 starts. Two shots behind with six holes to play, Kokrak delivered all the right shots to pull away from Scheffler and Trainer.

Scheffler, who was looking for his first PGA Tour victory, had a two-shot lead when he made the turn but could not convert. He didn’t hit a green in regulation until the 15th hole and made three soft bogeys along the way. And Kokrak took full advantage of the opportunity.

“It’s very special because I was struggling with my game at the beginning of the week,” said Kokrak, 36.

“I guess you can call me an underdog, but the last couple years I’ve played some pretty solid golf, so I wouldn’t exactly say that I’d be the underdog going in. I guess this week I would be because my game was not in top form and I definitely made the best of it. A lot of ups and downs.”

“I made some putts. That’s what kept me in it.”

Sunday’s victory is Kokrak’s ninth since turning professional in 2008 after playing college golf for Xavier University in Cincinnati. During his college career, he won both the 2006 and 2007 Ohio Amateur titles. Kokrak’s best result at a major was a tie for 19th at the 2018 PGA Championship. 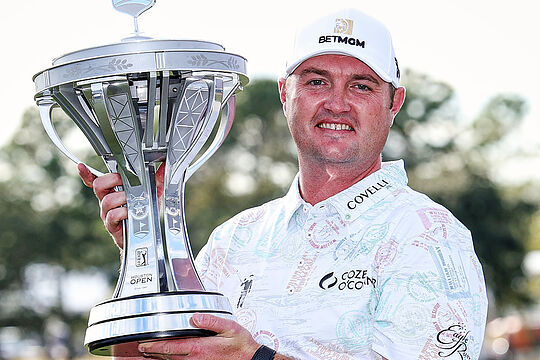 Last October Kokrak won The CJ Cup in Las Vegas and then went onto win the Charles Schwab Challenge in Texas last May.

With Tour earnings to date of US$19,824,576, Kokrak is quietly putting together a solid career and last season finished 11th in the FedExCup standings to qualify for the ninth consecutive season and advanced to the Tour Championship for the second time in his career.

During the 2021 extended PGA Tour season, Kokrak finished in the top-10 five times and made 21 cuts in 27 starts. This season in the three events he’s played to date there’s a win and another top-25 finish to have him at 7th in the FedEx Cup standings.

With Sunday’s victory Kokrak moves up to a career-best 22nd in the world.

Cam Smith finished the best of the Australians firing a closing round 69 to finish in a share of 15th position, with Marc Leishman also securing a top-20 result in equal 19th.

Adam Scott and Jason Day rounded out the Aussies to make the weekend with the two sharing 54th position. Cam Davis missed the cut.