Kooyonga Golf Club has won the 2015 Simpson Cup after defeating The Grange 5½ – 1½ in the final of the Golf SA Pennant Series played at Kooyonga.

It was an evenly balanced final after nine holes with The Grange leading in three matches, Kooyonga in two, while the remaining two matches were square. 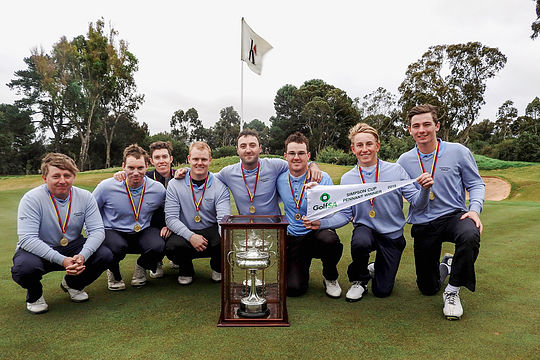 Kooyonga has won the 2015 Simpson Cup for a total of 33 victories (Credit: Golf SA)

As with the case in these pennant series, it is the bottom order which usually gets the job done and when Kooyonga’s number 7, Zak Fuller, and number 6, Joe Hodgson, closed out their matches winning 3&2 and 1up respectively it would give their team the momentum to close out the final.

The fifth match proved to be a real contest between Kooyonga’s Sam Gava and Alex Hendrick. Gava was 4 down after six holes but managed to dig deep to be just 2 down through nine. By the 14th the match was back to all-square and Gava by the 17th was 1-up.

At this stage The Grange’s top-order of Jack Williams, Ben Stowe and Andre Na was leading in all three matches.

With the balance of the final in Gava’s hands he cooly nailed a long putt on the 17th to snatch a 2&1 victory over Hendrick and the Simpson Cup for Kooyonga reversing last year’s loss to The Grange.

The top-order matches were then declared all-square.

“Absolutely delighted with the result, given the hard work and the commitment the squad has made and given the result from last year, which steeled the players into action to make sure the result was a bit different this year,” said Kooyonga Team Manager, Geoff Raneberg.

“Sam Gava is a welcome return to Pennant Golf and Joe Hodgson who is in his first year of Simpson Cup; we will see more of him and Zak Fuller and Danny Speirs were consistent, solid performers all year,” Raneberg added.