What a player…what a family!

It’s already been hailed as ‘The Korda Slam’ after Nelly Korda joined many of her family members as an Australian Open winner after capturing the ISPS Handa Women’s Australian Open in style at Adelaide’s famous The Grange course on Sunday.

She’s only 20 yet Nelly joined an illustrious group of family members in taking out major Australian titles.

Her elder sister Jessica won this very event at Royal Melbourne in 2012.

And their father Petr won the Australian Open tennis championships in 1998, before Nelly was even born.

Throw in the girls’ brother Sebastian, who is also a tennis ace and took out the Australian Open boys title in 2018, and you have a family that must be the equal of any in the world when it comes to sporting talent. 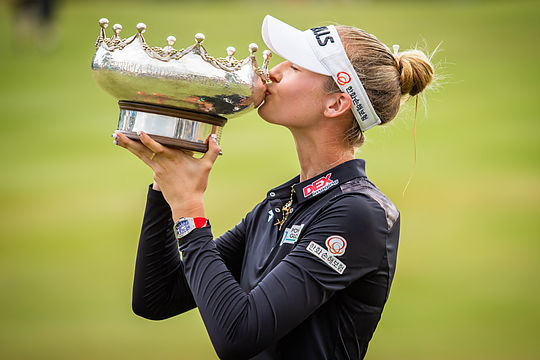 At the start of her big week Nelly pointed out that she had been feeling rather left out when the family began discussing their Australian Open wins.

“I’m finally part of the club,” she grinned while shouting with glee at her sister Jessica on the phone, who was watching the event from her Florida home.

Certainly they are the first sisters to win the Open and Korda’s two-shot win might even elevate her to the best player in the family – for the moment, anyway.

Korda took a three-shot lead into the final day and showed nerves of steel to hold off defending champion Jin-Young Ko of South Korea whose fabulous closing 64 threatened to halt Korda’s victory charge.

It is her second LPGA Tour victory after her maiden triumph in Taiwan last year, and her world ranking (currently 16th) might see her elevated into the top 10.

While Nelly Korda is five years younger than Jessica, she explained her sister had encouraged her to go her own way.

“What’s really great about Jess is that I was never really in her shadow,” she said.

“I mean, I was, but she never really made me feel like I was.”

Taiwan’s Wei-Ling Hsu was third at 12-under behind Ko, ahead of Angel Yin and Haru Nomura at 11-under.

Sarah Kemp and Hannah Green were the leading Australians at eight-under par, tied for 10th.

“It’s been amazing,” she said Kemp between broad smiles. “I could never have imagined a start to the year like this. It’s pretty cool to have to rearrange all my plans. But I’m not completely surprised.”

“I had a decent year in 2018 on the Ladies European Tour. I was 5th on the money-list. So, although I wasn’t expecting to play this well, I haven’t been bad. I came here with a bit of confidence.”

“This week has been so wonderful too. As a kid I dreamt of winning the Australian Open. If I could win any tournament in the world, it really would be a toss-up between the U.S. Open and this one.”

Five-time winner Karrie Webb closed with a one-over 73 to finish tied-38th. Webb had opened with a 5-under 67 and looked in ominous form but faded across the weekend with rounds of 74, 71 and 73.

Australia’s top-ranked player Minjee Lee had a 69 to finish tied-16th.

World No. 1 Ariya Jutanugarn found her game over the weekend and shot 69 today to finish 41st.