Korda makes it an Olympic golden double for US

American Nelly Korda closed with a one-shot victory in the Olympic women’s golf competition overcoming both the rain and her opponents in the final round to clinch gold for the US.

Korda, 23, continued her sparkling season after winning her first major, the Women’s PGA Championship in June, as well as two other tournaments, and then snagging the world number one ranking. Now she can add an Olympic gold medal to her collection of firsts this year. 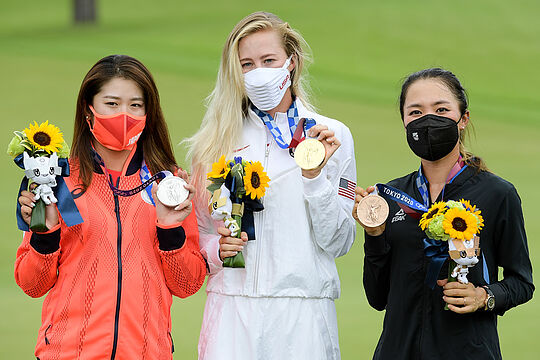 “It’s crazy,” said Korda. “It sounds absurd that I’m a gold medallist and an Olympian. I don’t know. It hasn’t sunk in yet.”

Korda began Saturday with a three-shot lead that moved to four with a birdie on the second hole. In a weather delayed final round Korda was able to hold off fast finishes from Japan’s Mone Inami and New Zealand’s Lydia Ko, who both carded closing rounds of 65.

Playing in the group ahead of Korda, the world number 28 Inami made five birdies between the 12th and 17th for a six-under final-round 65 and briefly a share of the lead, but it was a bogey on the last that was to prove decisive and enabled Korda to secure the gold medal.

The win was her fourth of the season including victory at the Meijer Classic to then come back the next week with a breakthrough victory at the Women’s PGA. Korda, whose tennis-playing father Petr won the Australian Open in 1998, was joined in her celebrations by older sister Jessica, who finished in a tie for 15th after shooting a 7-under 64.

With the win, the United States swept the gold medals in golf after fellow American Xander Schauffele won the gold in the men’s competition last Sunday.