Korda secures second win of the season at LPGA Meijer

Nelly Korda became the first two-time winner on the LPGA Tour this season, closing with a 5-under 67 on Sunday for a two-stroke victory at the Meijer LPGA Classic in Michigan.

In Gee Chun shot a 63 to tie for third with Brittany Altomare at 21-under-par. Anna Nordqvist followed at 20-under-par after a closing 66. 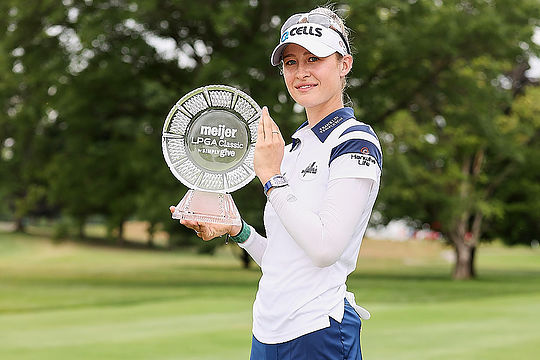 Korda finished at 25-under-par for a two stroke win over Ireland’s Leona Maguire and in the process set a new tournament scoring record.

“Actually, really enjoyed today,” said Korda. “Honestly, there has been times where on Sundays I really like haven’t enjoyed it, like the stress kind of ate me and I didn’t stay in the moment and enjoy playing golf on a Sunday in a final group.”

“But today I really enjoyed it and it was actually a really good battle between Leona and I. She definitely kept me on my toes.”

What’s In The Bag: Nelly Korda

The 22-year-old American, now ranked No. 3 in the world, won her fifth LPGA tour title and in the process recorded her 7th top-10 finish this season, her previous victory coming at the Gainsbridge LPGA Open.

Su Oh finished the best of the Australians in a share of 15th position with Katherine Kirk sharing 29th position. Gabi Ruffels and Hannah Green shared 45th position to be the remaining Australians making the weekend.

Next week, the LPGA Tour heads to their next major with the Women’s PGA Championship at Atlanta Athletic Club.