Jessica Korda closed with a five-under 66 and then holed a 20 metre birdie putt on the first playoff hole to beat Danielle Kang in the Tournament of Champions on the LPGA Tour opening event in Florida.

It was Korda’s sixth win on the LPGA Tour and her first in three years having won the 2018 Honda LPGA in Thailand. 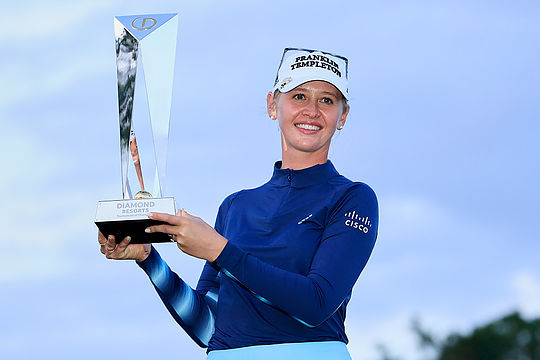 “I was playing so solid and then made a bunch of birdies,” said Korda.

“I knew I had to go low today. It was just a crazy day, a crazy week. I made some putts on 14 through to 17 and that helped. You never know what’s going to happen especially on the back nine.”

After starting the day two strokes behind Kang, Korda’s birdie at the par-3 16th pulled the pair into a tie at the top. The two swapped birdies at No. 17 and both players left their birdie putts short on the par-3 18th leading to the play-off.

The previous day Korda moved into contention with a round of 60, an ace at the par-3 18th hole would have given her just the second 59 in LPGA Tour history, but a two metre birdie was still a great way to cap off an impressive round that put her just two strokes off the lead.

Korda’s younger sister Nelly closed with a bogey-free 64 and finished two strokes back while playing in the final pairing with her sister. The Kordas are part of one of the most successful families in sport.

Their father Petr won the 1998 Australian Open and rose to No. 2 in the world in tennis. Their mother Regina played Olympic tennis. Their younger brother Sebastian, 20, is a rising professional tennis star who is currently 103rd in the ATP Tennis rankings and reached the fourth round at the 2020 French Open.

The Tournament of Champions first appeared in 2019 and is limited to winners on LPGA Tour events in the previous two years who compete within a celebrity tournament.