Korea has won consecutive World Amateur Teams championship with a three stroke win over Germany to claim the Espirito Santo Trophy in Turkey.

The Australian team of Minjee Lee, Whitney Hillier and Breanna Elliot finished in a creditable tied for third with Finland, four strokes behind Korea. 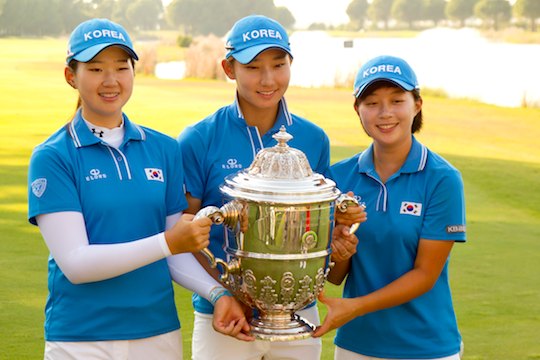 Breanna Elliot was the standout Australian performer, firing a 3-under-par total for her four rounds. Lee recorded a 1-over-par total, with Hiller at 13-over-par.

“It was a wonderful show of character from the team,” said Shani Waugh the Australian coach.

“Over three rounds at the Queen Sirikit Cup in April, Korea defeated us by 27 shots, so to come so close at the World Amateur is testament to the team’s improvement.”

Lydia Ko of New Zealand set a championship mark for lowest individual score with the world number one finishing at 14-under-par 274.

Ko, the reigning US Women’s Amateur champion and winner of the LPGA Tour’s Canadian Open, broke the mark set in 2010 by Korea’s Jung-Eun Han at 275.

Korea won the title last in 2010 in Argentina with a record-setting score of 546. The 2012 championship was the country’s third gold medal as it took the title in 1996 as well.