Korean Kyung-Tae Kim will take a one-shot lead into the final round of the Australian PGA Championship tomorrow after a five-birdie blitz around Coolum.

Kim is at 13-under-par following rounds of 69-67-67, with American Bubba Watson at 12-under-par in outright second position. 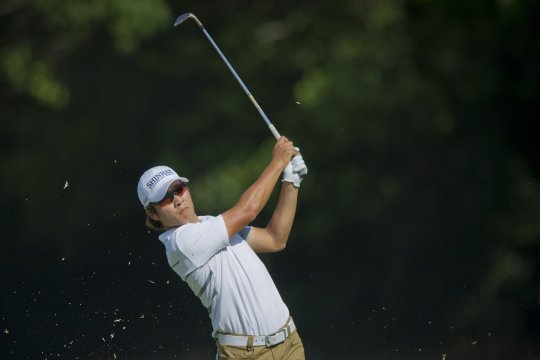 Kyung-Ta Kim fires into the 16th at Coolum during the third round of the Australian PGA Championship. (Photo: Anthony Powter)

Aaron Baddeley keeps the Australian hopes alive at 10-under-par and three behind Kim in outright third.

Robert Allenby had a shocker on the back nine with three bogeys and a double bogey to slip to eight-under. Earlier today, Allenby had held a share of the lead at 12-under.

Overnight leader Marcus Fraser, who had also held a share of the lead today, had a tough day at the office with a two-over 74 to drop back to equal fourth at nine-under alongside Y.E.Yang and David Bransdon.

A birdie start to his third round highlighted just what a marvel Greg Norman remains at 56 years old and in just his second tournament since a long lay-off after shoulder surgery.

The former world No.1 is at 6-under-par and in a tie for 13th, seven shots behind Kim.

Kim, aiming for his 10th career title, backed up his impressive form at the recent Presidents Cup and looks at ease around the Coolum layout.

The 25-year-old Kim is little known here but is a genuine rising star in world golf.

He is the world number 24 and has won in Japan and Korea and has done well in the US, where he played in all four majors this year – making the cut in three.

In 2010, Kim won the Diamond Cup Golf, Japan Open and Mynavi ABC Championship on the Japan Golf Tour and became the first Korean golfer to lead the money list on that tour.

Watson admitted to being very tired but the big-hitting American still remains a dominate force at this championship.

Watson appears to be simply going through the motions at Coolum but if he is, then he is doing it in impressive fashion with his 300-plus metre drives bringing the Coolum layout to its knees.

Matthew Giles was the day’s mover, with the Nationwide rookie at 8-under-par and in a tie for 7th along with Allenby.

With a career best tied 4th at the Mexico Open, Giles is positioned five strokes behind Kim.

Adam Scott’s rollercoaster form persisted as he fired three birdies, two bogeys and a double-bogey en route to a one-over 73 to leave him seven shots off the pace.