Kraft defeats Cantlay in US Amateur

The 2-up victory in the 36-hole final over world number one, Patrick Cantlay not only earns Kelly Kraft a spot on the US Walker Cup team, but has opened a number of doors for the Dallas native. 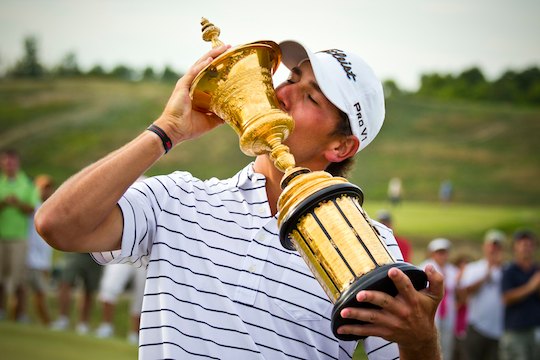 “It’s awesome and an honour to win this championship,” said Kraft.

“I was relaxed out there. Even though my putting was not as good as in previous matches, I really did not putt bad and made putts when I needed to.”

“I was happy being 2-up after the morning against the number one amateur in the world but you play to win on the second eighteen. To win this championship is hard to believe.”

Kraft had taken the lead when Cantlay bogeyed the 16th hole, then hung on for a 2-up victory.

Earlier and in a sign of things to come Kraft had progressed to be 4-up after 16 holes and 2-up after the first 18 holes. Cantlay fought back getting the match to all square going into the last nine.

Kraft then took a 1-up lead on the 33rd hole of the match when Cantlay made a disastrous error hitting an 8 iron from the bunker which eventually lead to a bogey on one of the shortest par 4′s at Erin Hills.

On the 180-yard par three 34th hole, Kraft was 18 feet from the hole and putted within a foot and Cantlay conceded the par.

Cantlay then proceeded to push his 12-foot putt from the fringe, seven feet past the hole. He missed the par putt and made bogey.

Call it a brain snap or whatever, yet the two successive bogeys on the closing stretch, that he’d played so well all week, clearly cost Cantlay the title.

From there, the two parred the 17th to set up Cantlay’s concession at the 18th after he missed the green with his third shot and left his chip 15 feet short.

“On 15, 16 and 17th, I made back-to-back mental mistakes and that cost me,” said Cantlay at the media conference after the final.

“Combine that with some poor shots on 15 and 16 and I was not able to recover. Kelly played solid all day and I had a one up lead going into the last four holes, but I made a five on a 250 yard par 4, and that makes me feel like I threw away the golf tournament.”

A three-time Conference USA Player of the Year, Kraft had progressed to the final after beating Great Britain and Ireland Walker Cup Team member Jack Senior of England, 3&2.

Kraft studied at Southern Methodist University where his golf results were solid, yet his focus remained on staying at school to complete a degree in Sociology.

“When I got to SMU,” said Kraft, “winning the US Amateur probably wasn’t a thought.”

Putting aside today’s win at the US Amateur, which is clearly his biggest win to date, Kraft has also secured the 2011 Texas Amateur and the Trans-Mississippi Amateur in consecutive outings.

In 2010, he was finalist at the North & South Amateur and recorded top-10 finishes at the Dixie Amateur and the Jones Cup.

“To win an event like the US Amateur is a dream come true. It’s awesome, I’m still coming to grips with it but I’m sure it will sink in this evening when I’m out with my mates.”