They’re fast running out of superlatives to describe the kind of run that Korea’s KyungTae Kim is on in Japan over the past 12 months.

Five times a winner in 2015 and twice already in 2016, Kim was at it again at the ‘Gateway to the Open’ Mizuno Open, shooting a one-over par 73 in difficult wet conditions to take out his latest title by a single stroke. 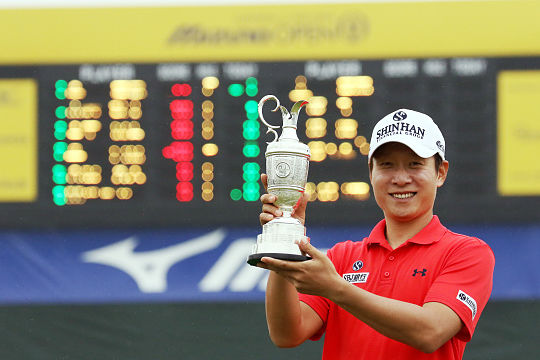 Kim finished at 11-under 277 to edge out the trio of Kodai Ichihara, Shugo Imahira and Sang Hi Lee at 10-under.

With Kim already qualified, the runners-up plus Japan’s Hideto Tanihara (the next highest ranked finisher) filled the four places that were on offer this week to play in The Open Championship at Royal Troon in July.

New Zealand’s Michael Hendry shared the joint overnight lead with Kim and contended strongly throughout the final round, however two late bogies cruelled his victory hopes and dropped him back to a share of fifth place at 9-under par.

With this victory, Kim extended his commanding lead on the Japanese Money List with earnings that already exceed ¥83,345,130 (AU $1million) in only five starts.

The ‘winningest’ golfer on the planet at the present time started the week with a ticket to the U.S. Open safely secured in his back pocket, courtesy of his ranking inside the Top-60 in the Official World Golf Rankings.

That ranking will obviously climb even further after this week and should see the 29-year on the cusp of the world’s top-30 players.

The Australian challenge was headed by Brad Kennedy, who finished at 4-under in a tie for 16th place.

The consistent Adam Bland was tied for 24th ahead of Brendan Jones (T42nd), Kurt Barnes (T48th) and Matthew Griffin (T54th).

Kim will line up for a chance at his third successive victory in Japan at this week’s JGT Championship at the Shishido Hills course in Ibaraki.