Matt Kuchar closed with a 4-under 66 to win the Sony Open in Hawaii for his second PGA Tour title this season and the ninth for his career.

The 40-year-old, who was victorious at the Mayakoba Golf Classic in November, struggled at the start of his round tallying bogeys on three of his first five holes, before carding five birdies and four pars on the back nine to secure the victory and top the leaderboard at 22-under-par.

Kuchar became the first multiple winner on the PGA TOUR this season and it was only the second time in his career he has won twice in the same season. He won the Match Play Championship and the Memorial in 2013. As a result of Sunday’s victory, he moved up 10 spots to No. 22 in the latest World Golf rankings.

“I’m tickled, thrilled to have won two events this early in the year,” said Kuchar.

“To have won two out of three starts on the PGA Tour is mind boggling to me. It absolutely sets up the year to be in great position for the FedExCup. There is a lot of year left and a lot of great things that are out there to be done.” 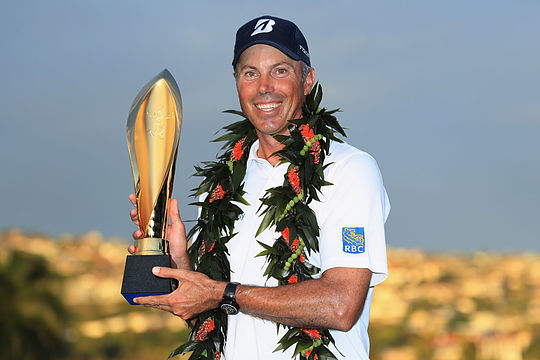 Andrew Putnam finished four strokes back in second following his 68, while Australian Marc Leishman, Hudson Swafford, Chez Reavie and Corey Conners all ended in a tie for third at 17-under.

Leishman closed with a bogey-free 64 to record another top-5 result a week after finishing tied 4th at the Sentry Tournament of Champions in Maui. The Victorian currently sits third in the FedExCup standing and has also managed to get his season off to a good start.

“If I could have made a few more putts today then who knows what might have happened but overall it is a good few weeks in Hawaii,” said Leishman.

“Two good finishes and a nice bank of FedExCup points keeps me up there in the standings.”

Defending champion Patton Kizzire finished with a 5-under 65 to be 13 under and tied 13th.

After missing the cut at the Sony, Jordan Spieth drops to 18th in the world – his lowest ranking since December 2013. It’s first time since the 2014 Sentry Tournament of Champions, Spieth has fallen outside the top 17 in the world ranking, and this is after beginning the 2018 season in the No. 2 position.

However looking at his statistics, Spieth is likely to bounce back. Last year, following missed cuts at the Memorial and US Open, Spieth picked up three top-12′s, two in majors, in his final seven events.