Kuchar never trailed in the championship match moving to 4-up after the front nine before Mahan mounted a mini-challenge which ended on the par 4, 17th where Mahan took four shots to reach the green. 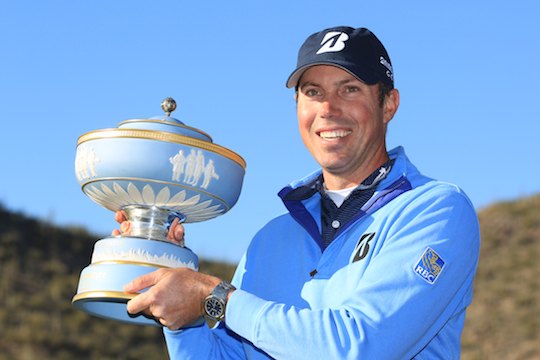 “It seems like each hole there’s so much momentum riding and so much pressure on every hole,” remarked Kuchar following the victory.

“To come out on top after six matches of playing the top 64 guys in the world, it’s an incredible feeling.”

Mahan was trying to join Tiger Woods as the only consecutive winner of the event, yet Kuchar’s match-play prowess was to deprive Mahan of this honour.

Kuchar’s 15-3 win-loss record in this event is the highest winning percentage (83%) of anyone who has played at least 10 matches. He also has reached the quarter finals each of the last three years, and this time went all the way.

Kuchar also rarely seems to get into trouble on the course, but he showed another aspect of his game on Sunday that has helped him become a constant contender on Tour – his short game.

That part of his game is often overlooked, but it’s a large part of why Kuchar has won five times on the PGA Tour, including a WGC and last year’s Players. He’s also won in four of the past five seasons.

In Sunday’s Final, Kuchar built a 4-up lead on Mahan despite hitting just four greens on the front nine. In total Kuchar hit just 7 of 17 greens in their match but scrambled and recovered well through an impeccable short game.

The story of Kuchar’s amateur stardom, professional struggles and the radical swing change that led to his redemption in 2010 has been told many times, yet it is a sobering reminder as to the challenges facing any player.

Kuchar was a relative unknown when he won the 1997 US Amateur as a 17-year-old Georgia Tech sophomore.

He then lost his PGA Tour card following the 2005 season despite having won a PGA Tour event less than three years after leaving college with the 2002 Honda Classic.

Finishing 10th on the 2006 Nationwide Tour money list resulted in Kuchar regaining playing privileges on the PGA Tour, but it would be seven long years since the Honda Classic before his next victory at Turning Stone.

Since then Kuchar, 34, has evolved into a true seasoned professional capable of claiming any tour title and making a run on the final day, just as he did last Sunday in Arizona.

“I was good in my younger days but streaky,” remarked Kuchar after the win.

“I could be really good for a while and then struggle. And now I feel like I’m a golfer that can hit quality shots week in and week out, day in and day out.”

Kuchar earlier had rolled in a five-footer for birdie at the 15th to close out a 4&3 semi-final win over Day.