Matt Kuchar and Harris English have recorded their third win at the QBE Shootout following a stunning nine-shot victory at the Tiburon Golf Club in Florida.

The pair broke several of their own records including their 37-under finish to break the previous mark by three strokes and the nine-shot margin broke their previous record of seven, which they set in 2013. 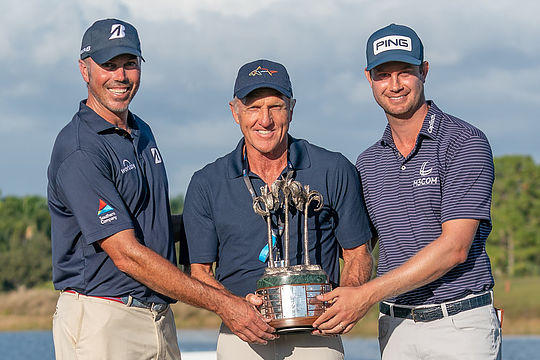 “The show Harris put on on the back nine was just awesome. I think he pulled me aside after 14 and said, “I think we need two shots to set the new mark.” I said, “We’ve got four chances,” and he went ahead and went birdie-eagle-birdie to close it out. It was fun to watch, fun to team up,” said Kuchar.

“It’s hard to fathom just how good of golf that was. It’s funny, as a player you stay in the moment pretty well and don’t think too much about it.”

Defending champions Rory Sabbatini and Kevin Tway fired a 28-under total but had to settle for a share of second place alongside rookies Lanto Griffin and Mackenzie Hughes and Kevin Na and Sean O’Hair, who lead the event on day one.

In its 32-year history only five other players have won the event three times including Steve Elkington, who played alongside Greg Norman for many years in the event and won in 1998, Brad Faxon, Scott McCarron, Fred Couples and Kenny Perry.

Ironically the tournament has proved to be a happy hunting ground for the Aussies with Jason Day and Cameron Tringale winning in 2014, Jerry Kelly and Rod Pampling (2006), Steve Elkington and Mark Calcavecchia (1995) and Steve Elkington and Raymond Floyd (1993).

With the Aussie summer tournaments cancelled, Marc Leishman and Cameron Smith took the chance to team up for the first time, finishing in outright 8th place and 12 shots off the lead.