American Matt Kuchar put up a inspirational performance when he overcame a potentially disastrous triple-bogey on the seventh hole by charging back with three birdies in his back-nine to win the SMBC Singapore Open on Sunday.

Despite a host of Asian Tour stars including defending champion and 2019 Asian Tour Order of Merit champion Jazz Janewattananond piling on the pressure, Kuchar showed he has the resilience to bounce back on the day that matters most at the Serapong course, Sentosa Golf Club. 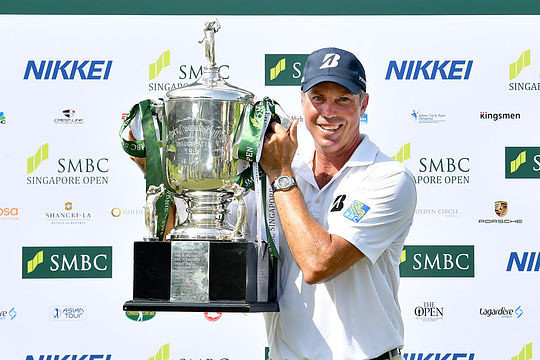 Holding a three-shot lead at the start of the day, Kuchar extended his lead to four with his first birdie on four. However, the American ran into trouble on the par-five seventh when his tee shot came up against the root of a tree and he missed the ball on his first attempt to punch it out from the trees.

The nightmare continued when his approach shot flew left of the green, hit a cart path and went out of bounds.

After hitting his sixth shot onto the front of the green, Kuchar eventually managed to hole a crucial putt from 10-feet for a triple-bogey eight.

But Kuchar mounted his comeback in his back-nine with birdies on 11 and 16 as his closest rivals fell by the wayside. The galleries then roared in unison as he went on to sink a birdie putt from almost 20 feet to win the iconic Singapore event with a final round one-under-par 70.

Former world number one Justin Rose finished in second place after posting a four-day total of 15-under-par 269 while Jazz took outright third place with a closing 71 at the US$1 million event.

Travis Smyth continued his solid form to top the Australian leaderboard this week on 8-under and in equal 11th place.

New father Matthew Griffin was next best in 41st place alongside Andrew Dodt with rookie David Micheluzzi in equal 65th.