It may have been four years in the making but American Matt Kuchar put a couple of major champions ‘to bed’ with his one-shot win over Danny Lee at yesterday’s Mayakoba Golf Classic.

The significance of his win, after a four-year “drought” was probably lost in the moment. 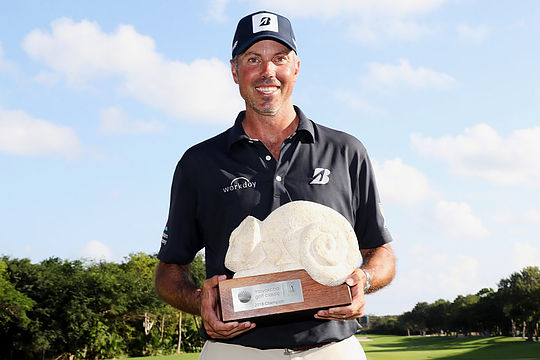 While he has been playing a lot of great golf – and bringing home plenty of cheques during that period, Sundays win was a major milestone.

It brought the popular American’s career tour earnings past $US45 million.

He earned $1.296m for Sunday’s win and it made Kuchar just the 10th player ever to break through that magical mark.

Before jumping on a plane to head for Australia, the ever-gracious Kuchar explained how amazed he was that golf could be so different from one day to the next.

“You just have to be patient and wait for everything to come right at the right time,” he grinned.

“I was hoping for a bigger buffer walking up the last but hey, I’ll take the win.”

It was Kuchar’s eight’s Tour title and the 40-year-old appears to be playing as well as he ever has.

Certainly he has continually proven that he has that ability to eke out a top-10 finish on a regular basis and actually boasts 99 top 10s in his 417 career tour starts as a pro.

No wonder most rate him the player to beat at The Lakes this week.