The class of Matt Kuchar prevailed in a difficult week in paradise as world number 16 mixed business with pleasure to stroll to a comfortable four-stroke victory at the Fiji International.

Survival was the primary objective over the first two rounds as players endured wind conditions that were bordering on unplayable.

The lowest ranked player in the field this week, Kuchar survived better than the rest to lead the field at 2–over par at the half way mark with the 36-hole cut being made at a staggering 14-over par around the exposed Natadola Bay layout.

With his family in tow and father Peter on the bag, the American started the final round two shots ahead and fired a three-under 69 for a 4-under par total of 284, four strokes ahead of NSW’s Aron Price. 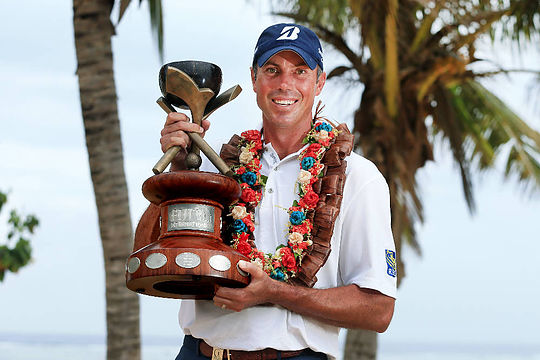 “It’s been a great week. It’s been so much fun to have the family here and have Dad caddying for me,” Kuchar said. “To finish on top has really made it an excellent week, one I’m sure I’ll never forget.”

“I knew I had to play some really good golf to try and have a chance at this title and I played some great golf this week. I was excited to come out on top.”

“Winning is a hard thing to do regardless of where you are, US PGA or Fiji, there are great players everywhere.”

Backing up from a victorious week at the Presidents Cup in Korea, Kuchar enjoyed his first win since the 2014 RBC Heritage on the PGA TOUR and was immediately ambushed by his two young sons on the final green.

“We’ve had an amazing time in Fiji and you probably don’t have to twist my arm too hard to get me back to Fiji. It’s been a great week and certainly it’s a destination I enjoy getting back to.”

Playing in the final group with Kuchar and South Australian Nick Cullen, Price hung tough despite the frustration of firing 16 straight pars to fail to mount any pressure on Kuchar.

A long awaited birdie at the 17th and a rock solid par at the last gave Price a final round 1-under 71 for an even par total and outright second place.

“I hit 16 greens in regulation and on the two I missed, I made pars. I didn’t have a bogey all day, just not enough birdies.” said Price, who has played on the PGA TOUR but struggled in recent years, missing 21 cuts since winning the 2013 NSW Open at Castle Hill.

Victorian Daniel Valente and New Zealand’s Brad Shilton were next best in a tie for sixth at 6-over par.

After a week’s break, the PGA Tour of Australasia will head west to the 2015 TX Civil & Logistics WA PGA Championship where Ryan Lynch will defend his title at the Kalgoorlie Golf Club from 29 October – 1 November.