Ever wonder why American Matt Kuchar is one of the world’s most popular players?

Then go take a look at a replay of the British Open and how he handled himself throughout a dramatic final day. 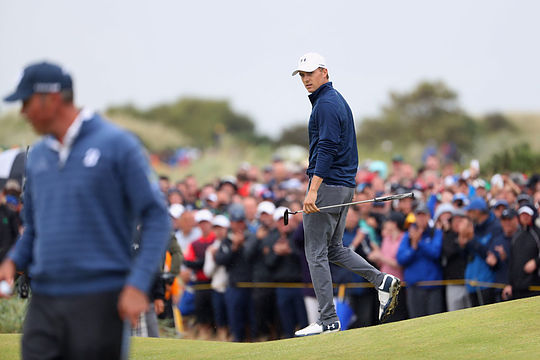 A final round that saw Kuchar lead by a shot from Jordan Spieth with just five holes to play.

‘Kooch’ then played the next four holes in two-under-par and still lost ground and was actually two behind by the time he reached the 72nd hole of the Open.

Yes, it was cruel but nobody in professional golf could probably have handled it better than Kuchar did.

He’s a man of class and probably needed every ounce of it as he faced his family that had flown in at the last minute to watch their hero hopefully win his first major title.

“That was really, really sweet for them to be there,” said Kuchar.

“It was just an amazing gesture for them to be there and support [me].”

“It was difficult on me to see the kids in tears knowing their dad didn’t win.”

“It’s an interesting position as a father…when your kids are young, they look up to you like you’re Superman…kind of you’re their hero.”

“You’re the one to protect them and save them and to do great things.”

“And when it doesn’t work out and you aren’t the hero holding the trophy, it’s saddening, as well.”

“I saw the look in their eyes, and I wanted to be that guy. So I was a little bit broken myself that I wasn’t that guy.”

“But golf is a very, very humbling game, and it’s amazing the lessons you learn.”

Kuchar could rightly be proud of his own efforts: