With a final round 2 under par 70, Kulacz finished the tournament at 13 under par and three shots clear of Steven Jeffress. 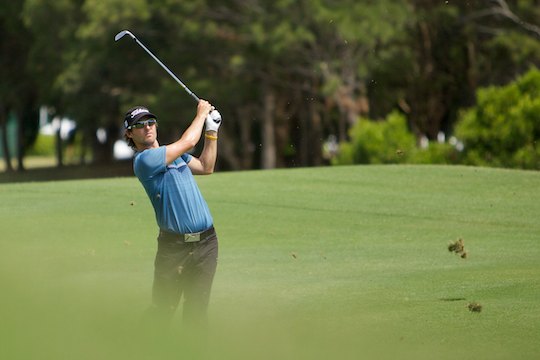 Heading into the final round with a one shot lead, Kulacz started the day steady with pars on the opening six holes though after a chip in on the seventh, he would turn in 2 under par holding a one shot lead over playing partner Michael Wright with a further shot back to Steven Jeffress.

Unfortunately for Wright though, four drop shots over the opening five holes of the back nine all but ended his chances of victory leaving Kulacz and Steven Jeffress to battle it out over the final few holes.

Kulacz, though a two time Asian Tour winner, would hold his nerve over the closing holes to secure one of his biggest victories in Australia.

After having his gall bladder removed just 10 weeks ago, Kulacz had to draw on his previous victories on the Asian Tour to get the job done on Sunday.

“I had forgotten just how hard it was to win. It was really tight through nine holes and all I could really do is take it one shot at a time. It’s a bit of a cliché but when you have some of the best players in the country coming at you that is all you can focus on”.

“It was my first time at Capricorn Resort and to be honest I wasn’t too sure what to expect but I can now see why this event is known as one of, if not the best pro am, in Australia”.

Kulacz can think himself lucky to even gain a start this week, relying on an invite just to play.

“Playing in Asia for most of the year, I rarely get a chance to come and play Pro Am’s, especially in QLD and therefore I am extremely grateful for being given an opportunity many others would have been screaming for”.

For Steven Jeffress it was another sign of him getting back to familiar territory near the top of a leaderboard.

The Gold Coast-based New South Welshman had a tough 2011 that saw him all but lose his Australasian Tour card, though with a top 10 at Rockhampton and a runner up finish this week, Jeffress has set his sights high for the rest of 2012.

“I would really like to win the QLD Sunshine Tour Order of Merit. I have a bit of work to do after a slow start to the year but I am looking forward to the challenge of winning a title that we all strive for”.

The next stop of the QLD Sunshine Tour is the coastal town of Bargara where Doug Holloway will be looking to go for the three-peat after winning in both 2010 and 2011.