American Jennifer Kupcho has secured a two stroke win over Jessica Korda to take out the Chevron Championship on the LPGA Tour in the first major of the season.

Six strokes ahead entering the round, Kupcho shot a two-over 74 for a two-stroke victory over Korda. The 24-year-old from Colorado finished at 14-under for her first LPGA Tour title after 65 starts on the LPGA Tour.

“I think I’ve matured a lot in the last year and even since I’ve been out here,” said Kupcho. “But I think my putting has got a lot better. I’ve been able to calm myself down a lot better. Obviously, I still have my spurts of anger, but I think that’s how I get it out quickly and then move on. I think my whole mental game has gotten stronger.”

Kupcho was the number one ranked women’s amateur golfer in the world for a total of 34 weeks, rising to the top on three occasions, the first time on July 11, 2018. She turned professional prior to the start of the 2019 US Women’s Open where she finished in a share of 62nd position.

Kupcho’s previous best finish in a major was a runner-up finish at the 2019 Evian Championship. As an amateur Kupcho won the inaugural Augusta National Women’s Amateur in 2019 and she also won the 2018 NCAA Division I Golf Championship whilst at Wake Forest University. 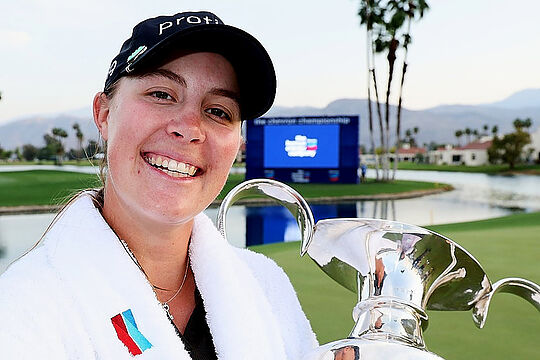 Pia Babnik of Slovenia closed with a 66 to finish third at 11-under.

Hannah Green finished the best of the Australians in a share of 8th position, with Minjee Lee in outright 12th position. Gabriela Ruffels shared 25th position to be the last of the Aussies to make the weekend.