Jennifer Kupcho and Lizette Salas won the Dow Great Lakes Bay Invitational on Saturday, closing with a 9-under 61 in best-ball play for a five-stroke victory in the LPGA Tour’s only team event of the year.

The duo finished on 26-under 254 at Midland Country Club after opening with a 68 in foursomes, to then shoot a best-ball 61 on Thursday and took a four-stroke lead Friday with a foursomes score of 64. 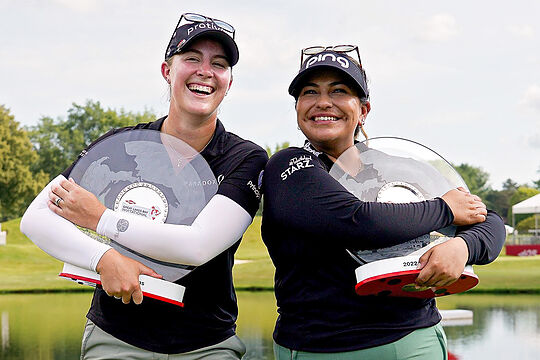 Kupcho won for the third time this year and in her career, while Salas won her second tour title.

“It was amazing to be alongside Lizette,” said Kupcho. “I think I was a little nervous coming into today just because I didn’t want to let her down. I’m sure she probably felt the same way.”

“It’s been a long time,” said Salas. “I couldn’t have done it without her. She’s a great competitor, a great friend, and an amazing partner on the golf course. We played some amazing golf this week. My job was – or my goal was – to play well for her. We showcased how our games can complement each other.”

Katherine Kirk and her partner Amy Olson finished in a share of 21st position, with Sarah Jane Smith and Mariajo Uribe finishing in 28th position.

The LPGA Tour moves to Europe for the Evian Championship before the Women’s British Open at Muirfield.