Kupcho closed with a one-under 71 on Sunday to match playing partner, and compatriot, Nelly Korda and Irishwoman Maguire at 18-under at Blythefield Country Club. Korda was eliminated on the first playoff hole leaving Kupcho and Maguire to battle it out with Maguire missing a one metre birdie putt on the second playoff hole when Maquire secured her birdie. 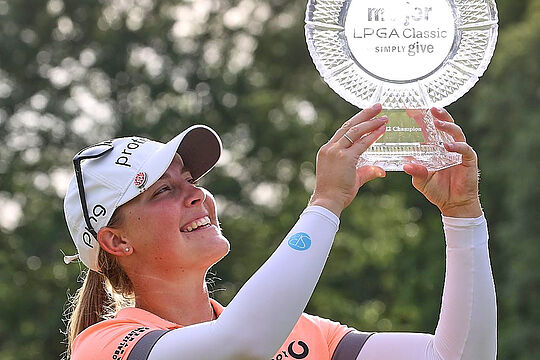 “To come out of this one with, I mean, top-ranked players all over the place, the leaderboard was packed, within strokes, so it really was very close, and I feel very proud of myself for coming out of it,” said Kupcho.

“I outplayed them, I guess. I hate to say that because they all are great players, but I controlled what I can control and that was my game.”

Kupcho earned a first-place prize money payout of US$375,000 from an overall purse of US$2.5 million. Kupcho was the number one ranked women’s amateur golfer in the world for a total of 34 weeks, rising to the top on three occasions beginning on July 11, 2018. She played collegiate golf for Wake Forest University taking out the 2018 NCAA Division I Golf Championship.