After finally unlocking his secret to success on the OneAsia Tour, colourful Aussie Kurt Barnes is now taking aim at this month’s British Open at Royal St George’s.

If it wasn’t for some supportive parents who backed their boy, Kurt Barnes wouldn’t be jetting out for his second consecutive British Open this month. 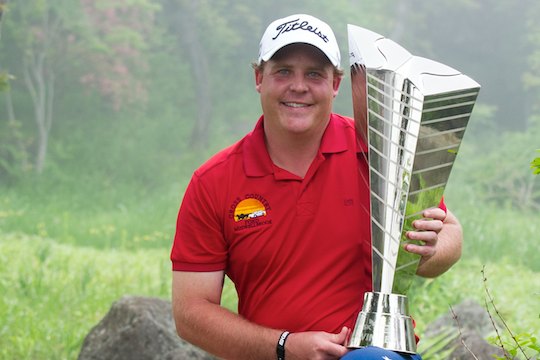 In fact, he probably wouldn’t be a professional golfer at all – such was the low he hit just a few seasons ago.

A lack of funds and, more importantly, a lack of self-belief and motivation had the big-hitting youngster from Muswellbrook in NSW at the crossroads and spending more time at the bar than out on the fairways.

Widely-regarded as being blessed with a ball-striking ability most tour players would die for, Barnes was seen as a riddle wrapped in an enigma. Nobody could understand why the loveable larrikin was letting a blossoming career go to waste.

As it turned out, neither could his parents.

“Mum and Dad basically said to me I had to start believing in myself or the golf career was finished,” Barnes told Golf Grinder.

“They were willing to support me financially for a while, but the moment I stopped having a go they said ‘you’re out’.”

“It was the wake-up call I needed and I realised I had to go out and give golf one last serious crack. The penny dropped – I had to start believing in myself and, well, here we are today. I’m heading to my second British Open with plenty of confidence and form behind me.”

Barnes has indeed turned the corner.

He returned home last month sitting third on the OneAsia Tour Order of Merit with nearly $190,000 in earnings following his impressive win at the SK Telecom Open in South Korea.

During his blistering start in Asia, Barnes also took time out to return home and once again make Melbourne’s Kingston Heath layout his own playground at British Open International Final Qualifying.

He shot the lights out, firing rounds of 66-69 to beat a world-class field and book his ticket to Royal St George’s with yet another emphatic display of brute power and finesse.

It replicated his qualifying efforts of 2010, where he then went on to miss the cut at St Andrews in a Major debut experience he will never forget.

This year, however, Barnes is aiming to be on the right side of the cut line, declaring he will be better prepared, both mentally and physically, to deal with the pressures of golf’s oldest Major tournament.

“I’m heading over there early on the Saturday and will play a few practice rounds and work on my course management and what’s required around the course,” Barnes said.

“There’s always going to be a big weather issue when you play over there, but I feel I’m definitely playing well enough to go over and at least make the cut and put myself in contention.

“I’ll definitely be better prepared to deal with the hype this year, having last year’s experience behind me. There’s going to be a real Major tone-down, if you like, with my support crew this time around. Only my parents are coming to watch me, not a group of 15 or so like last time.”

“I want to be totally focussed on the golf this year and give myself the best chance of playing great golf because I know it can pay dividends.”

Barnes will also be acquiring the services of European Tour caddy John Hort, who conveniently lives about an hour away from the Royal St George’s course.

“John’s experience over there will be a big help for me,” Barnes said.

“He’s not just a random caddy looking for a spot – he has caddied for some big names who win tournaments, so his knowledge and experience will be vital in my course management and preparation for the tournament.”

“Interestingly, my course management at the SK Telecom Open was probably the best it’s ever been.”

And while Barnes’ breakthrough on the OneAsia Tour may have given his growing legion of fans plenty of reasons to smile, for him it’s provided something else – reassurance about the biggest decision he has ever made in his life.

“By winning that tournament it really vindicated my decision to get serious about golf,” he said.

“The win really demonstrated to me that I do deserve to be here on tour, but now it’s all about finding that consistency.”

“I’m looking forward to the challenge that awaits me at Royal St George’s. I know when I get off that plane at Heathrow Airport on July 9, I’ll be ready to go with all guns blazing.”

Australian golf can only benefit from a Kurt Barnes in form.