Kyriacou caps off LET year with T4 at Saudi Ladies

Kyriacou, from St Michael’s Golf Club in Sydney, carded rounds of 68 and 69 over the weekend to finish at 7-under par, three shots behind the winner, Emily Kristine Pedersen. 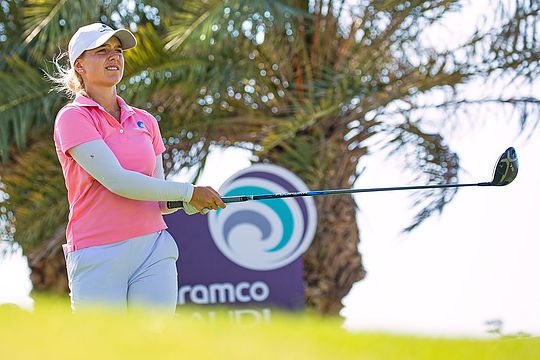 The €34,335 has also seen Kyriacou move into fourth place on the Ladies European Tour’s Race to Costa Del Sol with a handy 66.78 lead over England’s Alice Hewson in the battle for Rookie of the Year honours.

So far this season Kyriacou has played nine tournaments, collecting one win on the European Tour at the Ladies Classic – Bonville, four top-10 finishes and pocketed €74,232.56.

With the next wave of COVID-19 sweeping across Spain, Kyriacou has elected to miss this week’s Saudi Ladies Teams International, which begins this week at the Royal Greens complex.

The result brings to end Kyriacou’s tour overseas which began at the Scottish Open in August, included the Women’s Open for her first major experience, and included top-5 finishes at the Czech Ladies Open, Swiss Open and the French Open.

Kyriacou plans to return to Australia this month for a well earned rest in what has been an impressive rookie season for this exciting talent.