Australia’s Stephanie Kyriacou capped off a memorable first season on the Ladies European Tour with a chip-in eagle on her final hole at the Saudi Ladies Team International. 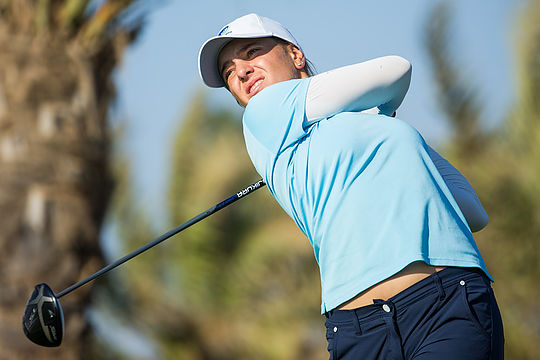 Kyriacou carded a new course record 9-under-par 63 which the 20-year-old all but mathematically sealing the LET ‘Rookie of the Year’ honours.

Kyriacou has made great strides since her extraordinary victory as an amateur at the Australian Ladies Classic in February. She turned professional two days later and has since enjoyed an impressive start in the paid ranks in the Race to Costa Del Sol, the Tour’s Order of Merit system.

The results for Kyriacou captures an impressive rookie season with 11 events played, one victory and five top-10 finishes to pocket €84,272.43 in season earnings to be 3rd in the Race to Costa Del Sol and 172nd on the Rolex Ranking.

Kyriacou is currently awaiting her flight in Dubai to return to Australia for a well earned break. Her scheduled flight was cancelled and she is uncertain about when her and her caddie father will be able to return home given the massive backlog of Aussies attempting to return to the country before Christmas.