Two young Australians will be able to test their games at the highest level for amateurs after qualifying for the US Women’s Amateur.

Stephanie Kyriacou and Doey Choi took vastly different routes through qualifying but were equally relieved to have earned spots in the field at the Old Waverly Golf Club in West Point, Mississippi, from August 6. 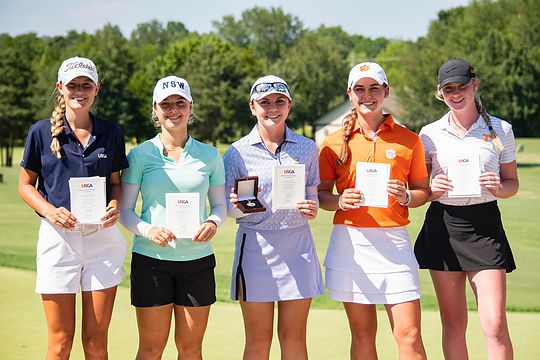 Choi fired an even-par 72 at the Saticoy Club in California while Kyriacou carded a four-under-par 67 at the Westhaven Club in Franklin, Tennessee.

Kyriacou was in control all day and said she felt qualification was never in doubt.

She explained that a change to her regular practice routine was the key to her impressive performance.

“I’ve been playing really well, and I played well at the Interstate series,” Kyriacou said.

“But I have been practising on the course more than I usually do since then.

“I was pretty confident with my game, so I wasn’t too stressed.”

In contrast, Choi said her qualification was a grind.

“I had a chat my coach before I came over, and we talked about staying patient, and that’s what I did today,” Choi said.

“This course was brutal. I knew it was going to be tough, and scores weren’t going to be low, I just tried to hit every fairway and every green.”

The Golf NSW High Performance pair now have a few weeks to prepare for the Women’s Amateur, beginning with the National Camp in Houston, Texas.

“I’ve never been to Mississippi; I am so keen,” said Kyriacou.

The duo will join Queensland’s Becky Kay and Gabi Ruffels, who also qualified this week.