Sydney’s Steph Kyriacou has carded a bogey-free 5-under 67 to claim her second LET title and first as a professional at the Big Green Egg Open in the Netherlands.

Kyriacou fired rounds of 66, 72, 65 and 67 for a two-stroke win and an 18-under total to add to her life-changing win last year as an amateur at the co-sanctioned Australian Ladies Classic Bonville in northern New South Wales.

“I’m buzzing! I forgot what it was like to win, it has been a little bit of time. There was some great golf out there, Sanna played really well, and she holed some really long putts. It was pretty tight, and I was a bit nervous,” said Kyriacou, who was the Ladies European Tour’s Rookie of the Year in 2020.

“It is something pretty special. He [Kyriacou’s father and caddie, Nick] has been there since day one. He spent all his time and energy when I was little so to have him on the bag for a win is pretty special. All my friends stayed up to watch my score! I’m very grateful for the support team I have.” 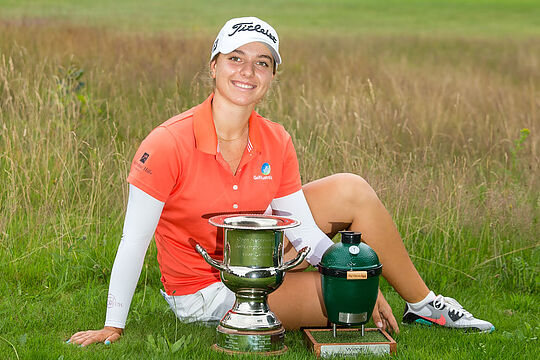 In 15 tournaments, the 20-year-old now has six top-10 finishes and sits in second place on the Race To Costa Del Sol.

Whitney Hillier was the next best of the Australians in a share of 29th while Kristalle Blum and Amy Walsh missed the cut.

Next up for Kyriacou will be the first in a series of tournaments known as Aramco Team Series. The $1 million events kick off in London from 8th – 10th July 2021.