The golf was top class and the difficult passage to the finals was all but forgotten as Sydney’s Steph Kyriacou and Brisbane’s Lewis Hoath took home Queensland’s premier amateur titles on Friday. 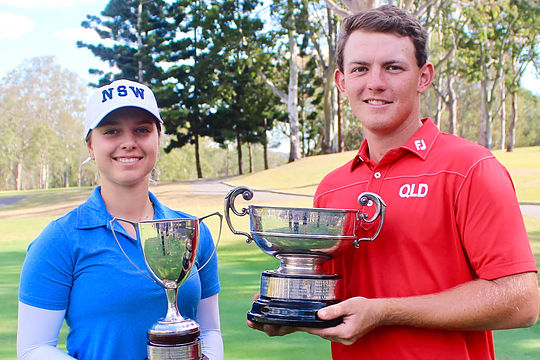 And in an all-Queensland final. Hoath, from the Emerald Lakes club beat Virginia GC’s Zach Maxwell 3&2 to take the men’s crown.

Park had appeared on track for the women’s title after prevailing in two extra-hole marathons and knocking out top seed Mirabel Ting on the final hole to reach the final.

This match ebbed and flowed until Park pulled her tee shot out of bounds on the 15th in what proved the decisive moment.

Kyriacou, a multiple NSW state team star seized her chance, winning that hole before halving the 16th and 17th before two terrific shots gave her a shot at eagle at the final hole.

Park’s three-putt par saw her concede Kyriacou’s birdie putt and a two-up win for the visitor.

Hoath, who defeated an in-form Lucas Higgins to make the final, was pitted against Maxwell, who himself had tamed New South Welshman, James Conran, in his semi-final.

The pair traded blows early and when Maxwell’s second consecutive birdie came on the fourth, he was 1-up and appeared to be cruising.

But an errant tee shot on the sixth proved telling for Maxwell, who unravelled early on the back nine with bogeys on the 11th, 13th and 14th to give Hoath the edge.

Maxwell made one last gasp with a great par save on the 15th to keep the match alive, but it was forlorn and the pair shook hands on the next green with Hoath a 3/2 victor.