It’s been a whirlwind 18 months for Sydney’s Steph Kyriacou since winning the Australian Ladies Classic Bonville as an amateur in early 2020 to secure playing rights on the Ladies European Tour.

And now her 2022 season just got a whole lot better after finishing 16th at LPGA Q-School to earn her tour card alongside fellow Aussies Karis Davidson and LPGA veteran, Sarah Jane Smith. 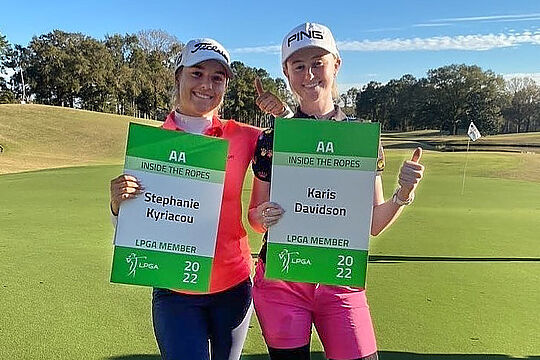 The St Michael’s phenom struggled in the second half of the gruelling 8-round tournament, which was split over two weeks at the Robert Trent Jones Golf Trail in Alabama.

In the end, her 11-under total and share of 16th place was more than enough to a secure a spot inside in the top-45, who qualify for the lucrative LPGA Tour.

“Coming into last week I played an event [in Europe] the week before so I was worried about the jet lag and all that, and then I had a really good first week which kind of took a little bit of pressure off,” said Kyriacou.

“I didn’t play that good this week but managed to smack it around, and, yeah, get some scores that will keep me up there. So, yeah, it’s pretty exciting.”

“You dream about it when you’re a kid, so to actually be playing on LPGA next year will be fun.”

The journey for Karis Davidson and Sarah Jane Smith wasn’t quite as easy with both players succumbing to nerves in the final round with Davidson racking up a 77 and Smith, a 76 to leave them at 4-under and in danger of missing the cut by a shot or two.

Thankfully they weren’t the only ones shooting high numbers and their 4-under totals saw them finish right on the cutline for the top-45 and ties.

For Davidson, it will be her first time on the US-based tour after spending the last few seasons on the Japan Ladies Tour but Smith’s LPGA rookie year dates back to 2006 and at age 37 and with her husband on the bag, there was a lot to play for.

Kyriacou is now making her way back home to Sydney to see her family for the first time in seven months and enjoy a well-earned rest.