Australian amateur Stephanie Kyriacou marked herself out as a rising star of women’s golf by storming to an emphatic eight-shot victory in the Geoff King Motors Australian Ladies Classic Bonville.

The 19-year-old from Sydney began the final round two shots clear of the chasing pack and quickly took control on the front nine at Bonville Golf Resort. 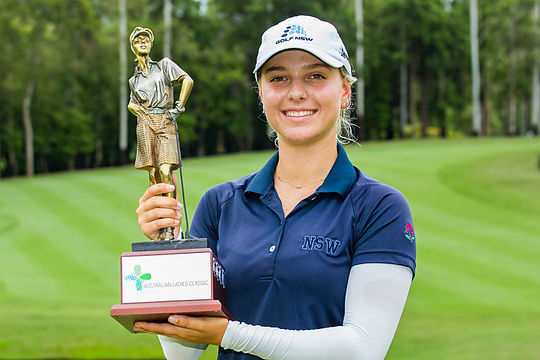 She made a barrage of birdies through the second, fourth, fifth, sixth, seventh and eighth holes to make the turn in six-under 29, with a lead of nine strokes.

Another birdie at the 10th took her to 22-under-par and she extended her lead to 11 with an eighth birdie on the 15th, after a heavy rain shower had passed through, followed by a lone bogey on the 16th.

Following on from rounds of 69, 63, 69 and a seven-under 65 in the final round for a total of 22-under-par, Kyriacou finished eight clear of world number 35 Ayean Cho at 14-under, who took home the first prize cheque of €36,000 due to Kyriacou’s amateur status.

“I’m lost for words and still on cloud nine. I think everything was going my way today. I was pretty confident going into the last round,” said Kyriacou.

“I did get off to a good start. The first hole wasn’t great again, but after that I bounced back and had five birdies in a row. After that, I played a bit more defensive, because I assumed I had a bit of a lead by then.”

“On the last hole, I was thinking about what would happen, but I told myself to get a par and then worry about it.”

Kyriacou will now have the opportunity to turn professional and take up a winner’s category of membership on the LET and ALPG Tours, but she said that she would discuss it with her father Nick, who was caddying for her, before making a decision.

Three-time ALPG winner Breanna Gill was the next best of the Australians at 6-under and in a six-way tie for 11th place while amateur Cassie Porter secured a respectable 27th place on 2-under with Whitney Hillier and amateur Doey Choi another shot back.