19-year-old Steph Kyriacou has turned pro on the back of a stunning performance at the recent Australian Ladies Classic at Bonville Golf Club.

The Sydney-sider fired rounds of 69, 63, 69 and 65 for a total of 22-under to win by eight shots in a tournament that just happened to be co-sanctioned by the Ladies European Tour. 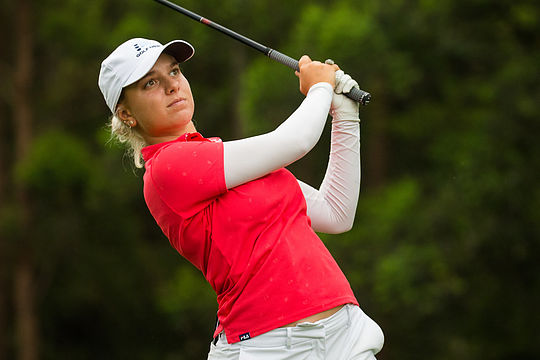 The win earned Kyriacou a two-year exemption on the LET and moved her up 547 spots on the Rolex Women’s World Golf Rankings to 287th.

“I’m so happy to announce that I’m turning professional,” said Kyriacou. “I’ll be playing my first event as a pro this week in Dubbo, so it’s very exciting.”

“It’s been very, very crazy. I’ve had so many messages and missed phone calls. I’ve had emails from I don’t even know whom. I’ve had all these big decisions to make and everything has happened so quickly.”

“It wasn’t a hard decision to make. I did weigh up all the options but I was hoping to turn pro at the end of the year anyway and this has opened up a few more doors and moved the goal post a bit.”

“I’m excited about getting a start in the Evian Championship, which is a major. That will be huge.”

Kyriacou is also coming off the back of a successful 2019 amateur season where she won the Women’s Australian Master Of The Amateurs, Queensland Amateur Championship and the Port Phillip Open Amateur and finished inside the top-10 16 times.